A 14 inch solid wood and meticulously carved plaque of the NAS Agana Guam. We can recreate any logo and personalize as you see fit.

Naval Air Station Agana is a former United States Naval air station located on the island of Guam. It was opened by the Japanese Navy in 1943 and closed by the United States government in 1995. During and after its closure, it was operated alongside Antonio B. Won Pat International Airport.

History
The airport was built by the Japanese Navy about 1943, calling the military airfield Guamu Dai Ni (Guam No. 2) as part of their defense of the Marianas. After the island was recaptured by American forces in 1944, it was renamed Agana Airfield, due to the proximity of the town.

After being repaired in October 1944, the United States Army Air Forces Seventh Air Force used the airfield as a base for the 11th Bombardment Group, which flew B-24 Liberator bombers from the station until being moved to Okinawa in July 1945. With the reassignment of the heavy bombers, the 41st Photographic Reconnaissance Squadron flew long range reconnaissance aircraft (F-4 versions of the P-38 Lightning) from the field until January 1946.

After the war, the USAAF used the airfield for fighter defense of the Marianas (21st Fighter Group), (549th Night Fighter Squadron) until early 1947 and as a transport hub (9th Troop Carrier Squadron). In 1947, the USAAF turned over the airfield to the United States Navy, which consolidated its facilities with those at the closing Harmon Air Force Base in 1949, and operated Naval Air Station Agana until it was closed by the 1993 Base Realignment and Closure (BRAC) Commission.

Be the first to review “NAS Agana Guam Plaque” 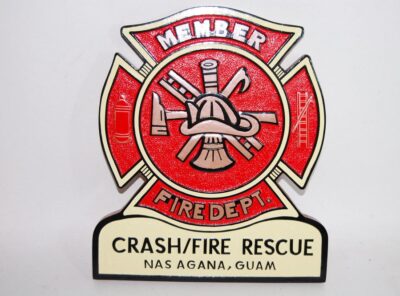