A 4″ inch with Hook and Loop Squadron Patch of the MWHS-2 Snake Eyes.

Marine Wing Headquarters Squadron 2 has traditionally been a non-deployable Marine Corps unit, though it supports the War on Terror through individual augments to deploying units. The unit deployed as a whole for the first time in February 2005 until February 2006 where it was deployed to Al Asad Airbase in the Al Anbar Province Iraq where it raised its new unit colors and squadron logo (known as Snake Eyes) designed and created solely by Sgt James Fife. It operated for a second time in Al Asad from February 2007 until March 2008 and deployed a third time to Al Asad from January 2009 until November 2009. 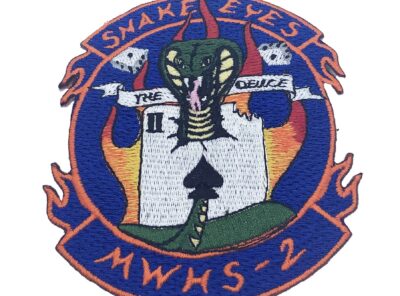