Marine Corps Air Station Cherry Point or MCAS Cherry Point(*34.9009°N 76.8807°W) (ICAO: KNKT, FAA LID: NKT) is a United States Marine Corps airfield located in Havelock, North Carolina, United States, in the eastern part of the state. It was built in 1941, and was commissioned in 1942 and is currently home to the 2nd Marine Aircraft Wing.

History
Congress authorized Marine Corps Air Station Cherry Point on July 9, 1941, with an initial appropriation of $14,990,000 for construction and clearing of an 8,000 acre (32 km²) tract of swamps, farms and timberland.

Actual clearing of the site began on August 6, 1941, with extensive drainage and malaria control work. Construction began in November just 17 days before the attack on Pearl Harbor.

On May 20, 1942, the facility was commissioned Cunningham Field, named in honor of the Marine Corps’ first aviator, Lieutenant Colonel Alfred A. Cunningham. The completed facility was later renamed Marine Corps Air Station Cherry Point, after a local post office situated among cherry trees.

Cherry Point’s primary World War II mission was to train units and individual Marines for service to the Pacific theater. The air station also served as a base for anti-submarine operations, with an Army Air Corps (22d Antisubmarine Squadron) and later a Navy squadron each being responsible for the sinking of a German U-boat just off the North Carolina coast during 1943.

Cherry Point’s contribution to the Korean War effort was to provide a steady stream of trained aviators and air crewmen as well as maintenance and support personnel as replacements to forward deployed aviation units.

During the Vietnam War, Cherry Point deployed three A-6 Intruder squadrons to the Far East and again provided a constant source of replacements for aircrews and enlisted aviation personnel.

Cherry Point Marines and Sailors participated in strike missions and follow-on operations in Afghanistan and its surrounding region during Operation Enduring Freedom, which was initiated on October 7, 2001.

On September 8, 2007, the headquarters building (198) was gutted by a fire. The groundbreaking ceremony for the new Headquarters Building was on 29 July 2009, with completion planned for sometime in 2011.

The air station and its associated support locations occupy more than 29,000 acres (120 km²). Its runway system is large enough that the air station served as an alternate emergency landing site for the Space Shuttle launches out of Cape Canaveral, Florida. 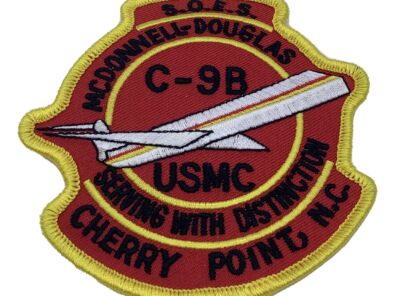