MWSS-273 “Sweat Hogs”
History
Marine Aircraft Group 31 was commissioned at Marine Corps Air Station Cherry Point, North Carolina, on 1 February 1943 under the command of Major Ralph K. Rottet.[1] In September 1943, MAG-31 left the United States for Samoa where its squadrons would be stationed at numerous Samoan bases. During much of 1944 the squadron would fly neutralization missions against many of the Japanese garrisons that had been by-passed in the Marshall Islands such as Rabaul.

During the Battle of Okinawa, MAG-31 came ashore on 7 April and began operating from Yontan Airfield on Okinawa.[4] They were immediately able to put 80 out of 109 aircraft into the fight and maintained a combat air patrol from 1750 until dark to aid in the fight against the kamikaze attacks that were devastating the American Fleet.[5] During the battle they also provided close air support for the Marines and Soldiers on the ground.[2] While on Okinawa, MAG-31 was commanded by Colonel John C. Munn, who was later promoted to Lieutenant General and served as the Assistant Commandant of the Marine Corps. The squadron stayed at Yontan Airfield until 1 July when they moved to Chimu Airfield further north on the island where they would stay until the end of the war.[6] During their time on Okinawa the squadron also operated over Kyushu, the Chinese Coast, the East China Sea area and many places in between Formosa and Kyushu.

The group returned to the United States 5 July 1946 as a night fighter group,.[7] and was stationed at Marine Corps Air Station Miramar, San Diego, California until it was decommissioned 31 May 1947.

MAG-31 was reactivated 17 March 1952, at MCAS Cherry Point, North Carolina, and transferred to Marine Corps Air Station Miami, Florida, operating as a part of the 3rd Marine Aircraft Wing until it was again decommissioned in 1958.

On 1 November 1961, the group was again reactivated and stationed at its present home, Marine Corps Air Station Beaufort, South Carolina, as part of the 2nd Marine Aircraft Wing. 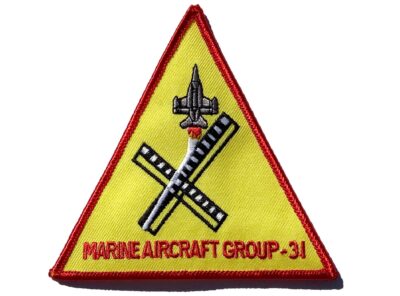