Commissioned at NAS Key West, FL, on January 3rd 1956, HS-5 flew the HSS-1N helicopter with a primary mission to deny effective enemy use of submarines against air or surface targets. Later test and evaluation proved that over water, night operations without visual reference were viable for around-the-clock, all-weather ASW operations. Due to this trailblazing effort with submersible sonar-equipped helicopters that HS-5 acquired the name “Nightdippers.”

In July 1992, HS-5 and CVW-7 were assigned to USS GEORGE WASHINGTON (CVN 73) and transited through the Suez Canal to the Arabian Gulf twice, first to participate in Operation SOUTHERN WATCH and again to counter Iraqi aggression near the Kuwaiti border in Operation VIGILANT WARRIOR. During the deployment, HS-5 surpassed 14 years and 44,000 hours of mishap-free flying. In February of 1995 HS-5 transitioned to the H-60 “Seahawk” and joined Carrier Air Wing SEVEN in support of NATO’s Operation DECISIVE ENDEAVOR. Between 1992 and 2009, HS-5 received the Admiral Thach Award five times and the COMNAVAIRLANT Battle “E” in 1992, 1995, 2000, 2002, and 2005-2010. They also received the Isbell Trophy for ASW Excellence in 2006, 2011, and 2012.

In 2005, HS-5 participated in the massive Hurricane Katrina relief effort and rescued 41 people and delivered 14,860 pounds of food and water to hurricane victims. From January to July 2009, HS-5 deployed in support of Operation ENDURING FREEDOM. Seven months later, HS-5 again deployed aboard CVN-69 and on the first night aboard launched the alert aircraft and expeditiously conducted a long-range open ocean rescue in perilous weather conditions; they also later recovered three survivors from an E-2C Hawkeye forced to ditch in the North Arabian Sea. While deployed the squadron’s homeport officially changed to NS Norfolk, VA.

In June of 2012, HS-5 and CVW-7 deployed with Carrier Strike Group EIGHT (CSG-8) aboard CVN 69, receiving the EAWS Pennant, signifying 75% of the command as Aviation Warfare qualified. Twelve days into the deployment, HS-5 successfully rescued a French Rafale pilot who ejected in the Mediterranean Sea and returned him to the French aircraft carrier, Charles de Gaulle. Over the six month deployment, HS-5 flew 693 sorties, totaling 1,877 hours and 643 night hours, including 54 hours of ASUW training, 78 hours of ASW training, 29 hours of NSW training, 130 hours of Strike training, and 85 hours of functional check flights. Due to an unpredicted status change, HS-5 returned home for two months before deploying again with CVN-69 until July 2013. Two months into the second deployment, HS-5 successfully rescued two American Naval Aviators who ejected from their F/A-18F in the Persian Gulf.

In 2012, HS-5 received the Blue “M” for medical readiness and the Fiscal Year 2012 Retention Excellence Award. Upon return to homeport, HS-5 began its transition to the new MH-60S platform as part of the Helicopter Sea Combat (HSC) community. In January 2014, HS-5 successfully transitioned to HSC-5. The Nightdippers were recently awarded the 2013 Battle Efficiency Award for demonstrating the hightest state of battle readiness over the past year. 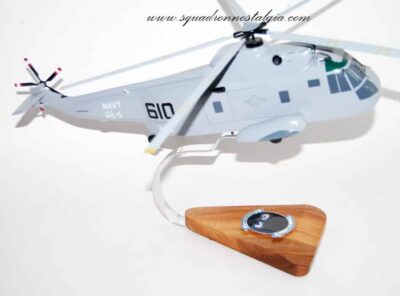 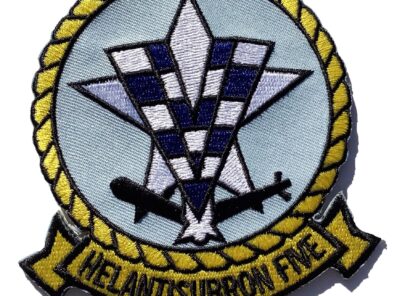 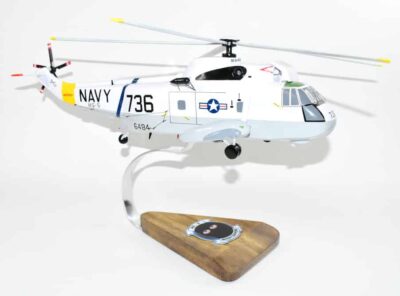 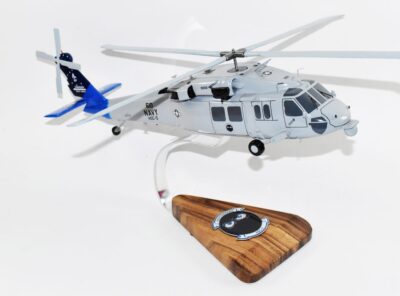 HSC-5 Nightdippers MH-60S Model Fly with the Night Dippers of HSC-5 in this MH-60S model. Each piece is crafted from wood and hand painted to provide a piece you’ll treasure. Length – 16 inches Made from Mahogany US Veteran Owned … Read More