HSC-25 is the first and only forward-deployed vertical replenishment (VERTREP) squadron in the Navy and is tasked with supporting Seventh Fleet units in the Western Pacific, Indian Ocean, North Arabian Sea, and Persian Gulf. To provide this support, HSC-25 embarks two-aircraft detachments aboard Military Sealift Command vessels which provide transportation of equipment, fuel, supplies and ammunition to sustain U.S. forces worldwide. In addition, the squadron was tasked in 1992 to provide a permanent Search and Rescue (SAR) detachment aboard the USS Belleau Wood (LHA-3). In the spring of 1996, HSC-25 deployed their first night vision device capable amphibious SAR detachment to USS Belleau Wood (LHA-3). In the fall of 2000, the SAR detachment was permanently moved from the USS Belleau Wood to the USS Essex (LHD-2). In the winter of 2011, the SAR detachment was again permanently moved from the USS Essex (LHD 2) to the USS Bonhome Richard (LHD 6) whose homeport is Sasebo, Japan.

In the Fall of 2005, HSC-25 was again the first HSC Squadron to assume a new mission, providing essential Air Ambulance services for Coalition Forces, and Compotent Command (CFLCC) in Camp Buering, Kuwait. 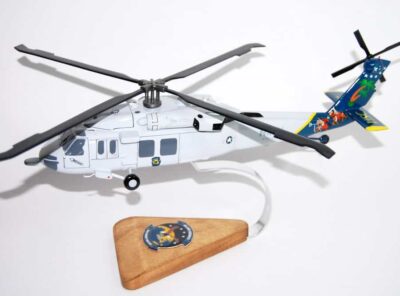 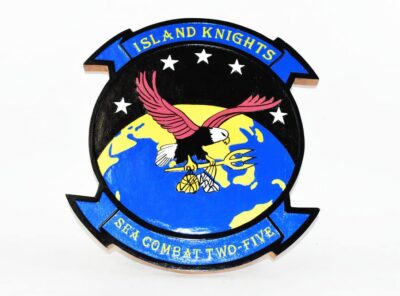 HSC-25 Island Knights Plaque A beautifully carved 14 inch solid wood plaque of the HSC-25 Island Knights!  Collect all your squadrons with truly artistic craftsmanship of the Navy’s finest symbols. Made from Mahogany US Veteran Owned Business The use of … Read More