HMM-265 was commissioned on October 1, 1962 at Marine Corps Air Facility Jacksonville, North Carolina. Originally flying the UH-34, the squadron deployed to Memphis, Tennessee shortly after commissioning in support of the Mississippi Crisis, a critical moment in the American civil rights movement. Following that, HMM-265 began a series of deployments testing new helicopter tactics such as the night raid. The squadron’s commanding officer, LtCol Beeler, developed innovative new helicopter tactics and became a legacy in the “Dragons” and in helicopter aviation.

The day of destiny for HMM-265 occurred on June 29, 1964 as BUNO 150942 was flown for 3.4 hours to the squadron’s home at MCAF Jacksonville by LtCol Beeler. By July of that year, the squadron began accepting Sea Knights and is the first FFleet Marine Force squadron to fly the aircraft. To commemorate their new aircraft, the Dragons of HMM-265 unveiled a new insignia on October 1, 1964. This design, created by PFC Charles D. Lyles, was the official unit patch until 2007, when a new design was adopted, based on the Japanese Shinjitai for dragon: . On February 4, 1966, as HMM-265 became the first Marine Squadron to log 10,000 accident free hours in the CH-46A. This is a great achievement in an era when the CH-46 was going through the growing pains that occur when a new aircraft is fielded.

In April 1966, HMM-265 boarded the USS Boxer (LPH-4) in Norfolk, Virginia. On May 22, 1966, the squadron arrived in Vietnam at the Marble Mountain Air Facility located southeast of Da Nang Air Base. The squadron had 22 CH-46As and was assigned to Marine Aircraft Group 16, 1st Marine Aircraft Wing.

On July 15, 1966, during the first day of Operation Hastings, HMM-265 had two of its helicopters crash. The first crash was caused when a CH-46A struck a tree during the initial insert of Marines from 3rd Battalion, 4th Marines and the second occurred later that evening when aircraft EP-171 was hit at 1,500 feet by 12.7mm fire resulting in the death of 13 Marines.[2][3] In addition to daily missions transporting Marines and cargo, HMM-265 and its Sea Knights flew in support of Operation Macon from July 4 through October 27, 1966. HMM-265 along with HMM-164 conducted multiple battalion insertions to allow the 3rd Marine Division to conduct multiple search and destroy missions in the An Hoa region. 12th Marines artillery and Marine A-4 Skyhawks fired on landing zones prior to the CH-46s landing.
The other major operation in 1966 was Operation Prairie (August 3 – September 13). The Dragons supported the 4th Marine Regiment as they battled for the Nui Cay Tre (Mutter’s) Ridge. Landing in “hot” zones under heavy enemy fire marked this battle, a harbinger of future battles in Vietnam.
In July 1967, HMM-265 became the Special Landing Force (SLF) helicopter squadron embarked aboard the 7th Fleet’s Amphibious Ready Group. As the SLF squadron, the Dragons were tasked with conducting heliborne search and destroy missions against Viet Cong targets along the coast. During this time, five major operations were conducted with names such as Bear Chain/Fremont, Beacon Guide, Kangaroo Kick, Beacon Gate, and Cochise.
The Dragons resumed duties as the SLF squadron aboard the USS Iwo Jima (LPH-2) in May 1969. They conducted amphibious raids in support of Operations Bold Pursuit (June 27 – July 6), Mighty Play (July 10 – July 20), and finally Defiant Stand (September 7 – September 18). After three years in Vietnam, the squadron was relocated to Marine Corps Air Station Santa Ana, California on October 10, 1969 leaving their helicopters with other in-country squadrons. A total of twenty-seven HMM-265 Marines perished in the war. HMM-265 was rebuilt using a few squadron personnel returned from Vietnam and the Marines of HMMT-301. The CH-46A helicopters left behind in Vietnam were replaced by the CH-46 Super D from overhaul. The squadron was deactivated on November 13, 1970.
Reactivation in 1977
On September 1, 1977, HMM-265 was reactivated at Marine Corps Air Station Kaneohe Bay, Hawaii under the command of Lt. Col. Donald Klingler, reestablishing a presence in the Pacific that continues to this day. On the day of reactivation, the squadron had no helicopters, and by December it was almost at a full strength of 4 CH-46Ds and 7 CH-46Fs.
In the spring of 1978, HMM-265 deployed to Kauai’s Barking Sands training area to increase combat readiness in preparation for their upcoming Western Pacific deployment. While there, the squadron performed exercises in low terrain flying and troop transportation.
In April 1978, HMM-265 embarked onto the USS New Orleans LPH-11 and departed for the Western Pacific in order to establish first-line-of-defense military presence during the Cold War era. The squadron was away from Kaneohe Marine Corps Air Station for six months, during which they completed a training exercises In Cebu, Philippines with additional port calls in Hong Kong and Singapore. The deployment strength for this mission was 12 CH-46s, 4 CH-53s, 2 UH-1Ns, and 2 AH-1Js.[5] After spending a year at home, HMM-265 began preparing for their next deployment by accomplishing a training exercise on the island of Kahoolawe. They spent the first weekend of August 1979 on the island conducting amphibious operations with the Battalion Landing Team, combining the AV-8A Harrier and helicopter operations and conducting exercises on board the USS Tripoli.

In late August 1979, HMM-265 deployed again to the Western Pacific, this time on the USS Tripoli, to maintain military presence during the Cold War. Once again under the command of Lt. Col. Donald Klingler, the squadron deployed with the Marine Amphibious Unit (MAU) to combine with several additional MAUs to participate in Operation Fortress Gale in Okinawa. Following that, they participated in an assignment called Kangaroo Three in Northeastern Australia, a joint operation between the squadron, the New Zealand military, and the Australian military forces. They also visited New Guinea, Hong Kong, Tasmania, and Sydney where they celebrated the Marine Corps birthday on November 10, 1979. The deployment strength during this assignment was 12 CH-46s, 4 CH-53s, 2 UH-1Ns, 2 AH-1Js, 2 AV-8As.
After the squadron returned home in early February 1980, the reins of the squadron were passed to Major William Barba during a Change of Command ceremony on February 22. Under the leadership of Maj. Barba, the squadron continued to operate in and out of Kaneohe Bay and the Western Pacific.

The Gulf War & the 1990s
In 1990 and 1991 the Dragons were attached to the 5th Marine Expeditionary Brigade, Marine Air Group 50. During Operation Desert Shield, they took part in Operation Sea Soldier IV the largest NVG troop lift ever in Marine Corps history in the country of Oman. The squadron then waited on amphibious shipping in the Persian Gulf awaiting the start of combat operations. The Dragons were part of the 5th Marine Expeditionary Brigade’s amphibious feint into Kuwait, which succeeded in drawing the attention of Saddam Hussein’s forces away from the actual attack that occurred inland.
Upon conclusion of hostilities in the Persian Gulf region, HMM-265 returned to Hawaii. While en route, they were called upon to provide humanitarian assistance and disaster relief to the country of Bangladesh during Operation Sea Angel. During the operation the Dragons flew 770 Phrog hours in ten days.

The squadron had little time to rest before deploying to Okinawa in October 1991. During this deployment the Dragons provided support to HMX-1 for the Presidential visit to Tokyo. The Dragons were then called to Cambodia in support of Operation Full Accounting in 1992, where they assisted in the recovery of remains of US Servicemen lost during the Vietnam War. The Dragons of HMM-265 were relocated entirely to Marine Corps Air Station Futenma, Okinawa Japan in early 1995.

Heightened tensions in the Persian Gulf during the fall of 1998 brought the Dragons back on a no-notice deployment as the Aviation Combat Element (ACE) for the 31st Marine Expeditionary Unit. They participated in Operation Desert Fox in the Persian Gulf and Kuwait from November 1998 through February 1999. When the squadron returned, they had a short break before deploying again. This time, the Marines helped end a bloody civil war on the small island country of East Timor during Operation Stabilise in October 1999 and again during January and February 2000.
Global War on Terror
Deployed in support of Operation Iraqi Freedom operating from Al Asad Airbase, Al-Qa’im, and Korean Village from October 2004 to February 2005. 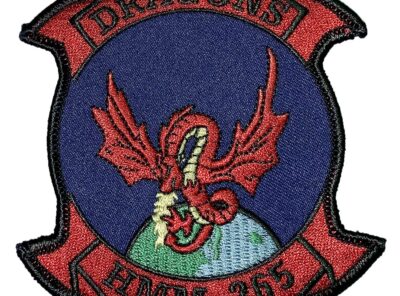 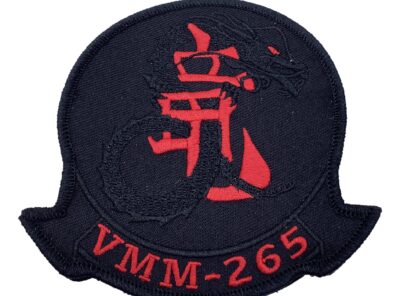 VMM-265 Dragons (Black and Red) Patch- With Hook and Loop 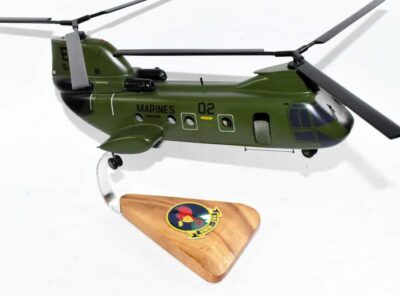 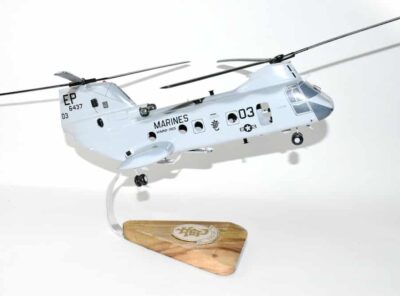 HMM-265 Dragons CH-46 (6437) Model Fly with the Dragons of HMM-265 in this hand crafted CH-46 Phrog model. Each model is carved from wood and hand painted to provide a unique piece that will always be treasured. Length – 14 … Read More 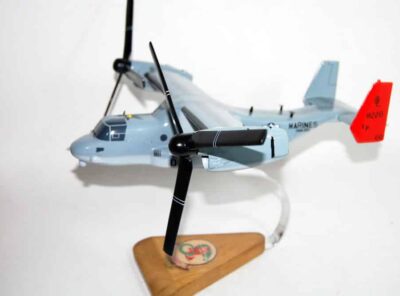 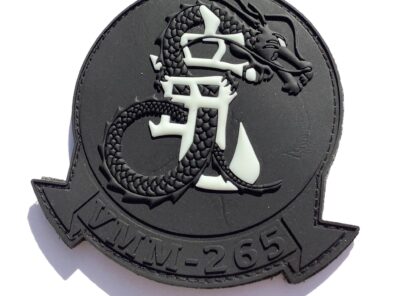 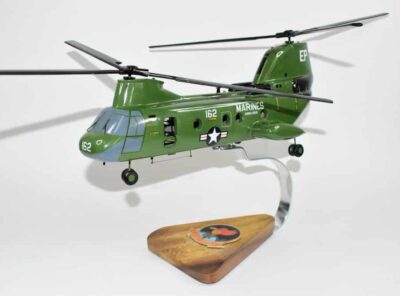 HMM-265 Dragons CH-46 (162) Model Fly with the Dragons of HMM-265 in this hand crafted CH-46 Phrog model. Each model is carved from wood and hand painted to provide a unique piece that will always be treasured. Length -14 inches … Read More 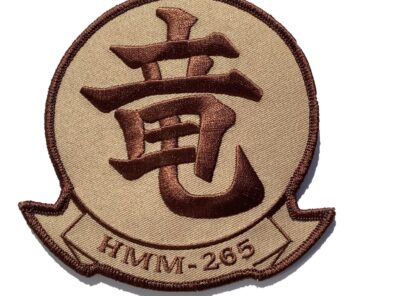