Fly with the HMM-161 Greyhawks in this handcrafted CH-46E Model. Each model is carefully carved from wood and hand painted to provide unique piece you’ll love.

Marine Medium Tiltrotor Squadron 161 (VMM-161) is a United States Marine Corps transport squadron consisting of MV-22 Osprey tiltrotor aircraft. The squadron, known as the “Greyhawks”, is based at Marine Corps Air Station Miramar, California and falls under the command of Marine Aircraft Group 16 (MAG-16) and the 3rd Marine Aircraft Wing (3rd MAW). The squadron has the distinction of being the first helicopter transport squadron in the world.

Korean War
The squadron was activated on January 15, 1951 at Marine Corps Air Station El Toro, California, as Marine Helicopter Transport Squadron 161 (HMR-161) Air Fleet Marine Force Pacific, the squadron moved a month later to Marine Corps Air Facility, Santa Ana, California to train on their new helicopter, the Sikorsky HRS-1. Except for the commanding officer, LtCol George Herring, most pilots in the squadron had flown fighters during World War II.[2] In August 1951 the squadron deployed to Korea and attached to the 1st Marine Aircraft Wing (1 MAW), where it operated in the central and the western fronts.[3]

HRS-1s of HMR-161 flying from USS Sicily in September 1952.
After becoming the first helicopter squadron to deploy troops into combat, HMR-161 successfully flew from the USS Sicily (CVE-118) to test new concept of combining vertical envelopment with amphibious assault during Operation “Marlex-5” off the coast of Inchon on September 1, 1952. While not the first ever ship to shore helicopter flight with Marines aboard, that having been done by HMR-162 during Operation Lex Baker off the coast of Southern California in February, 1952, it was the first on foreign shores. During the course of the Korean War, HMR-161 flew 16,538 hours during 18,607 sorties eventually accounting for over 60,000 troop movements and moving 7.5 million pounds of cargo.[4][5] The Greyhawks then participated in the defense of the Korean Demilitarized Zone (DMZ) from July 1953 to March 1955. The Squadron then relocated that month to Marine Corps Air Station Kaneohe Bay, Hawaii, and attached to Marine Aircraft Group 13 (MAG 13). While in Hawaii, HMR-161 was redesignated on December 31, 1956 as Marine Helicopter Transport Squadron (Light) 161 (HMR(L)-161), MAG 13, 1st MAW. In May 1960, the Squadron received the new Sikorsky H-34 Seahorse.
On February 1, 1962, the unit was once again re-designated as Marine Medium Helicopter Squadron 161 (HMM-161), MAG 13, 1st Marine Brigade. On October 3, 1962 the Greyhawks assisted NASA by recovering astronaut Wally Schirra and his Mercury Capsule “Friendship Seven” out of the Pacific after a successful launch into space.
During 1963, Marine Medium Helicopter Squadron 161 (HMM-161) assisted in several biological warfare tests conducted under Project SHAD at Pearl Harbor, Kaneohe Naval Air Station and in the Pacific Ocean, near Oahu, Hawaii.
Further information: Project 112
The rest of the early 1960s were spent conducting anti-guerrilla training in preparation for deployment to Vietnam.
Vietnam War and the 1980s

A helicopter from HMM-161 waiting to transport prisoners just south of Chu Lai during Operation Starlite in 1965.
HMM-161 deployed in May 1965 to Phu Bai Combat Base, Republic of Vietnam[6] and attached to MAG-16, 1st Marine Aircraft Wing. It then relocated in January 1966 to Marine Corps Air Station Futenma, Okinawa to receive its new Vertol CH-46 Sea Knight. By April 1966, the Greyhawks had redeployed to Da Nang, Republic of Vietnam with a move to Phu Bai that June. On September 25, 1966 a UH-34D HUS from HMM-161 was struck by a friendly artillery shell while conducting a medevac mission during Operation Prairie resulting in the death all five Marines on board. It is the only known case of friendly artillery fire shooting do 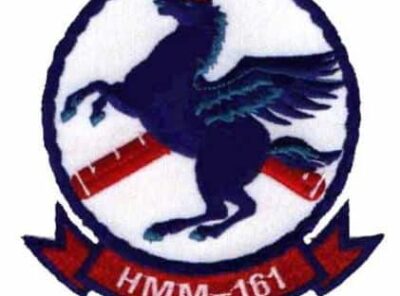 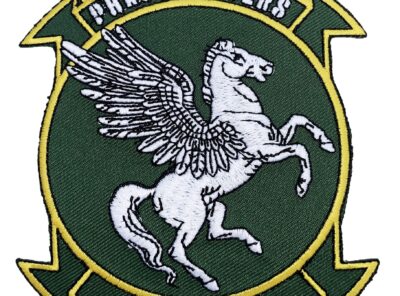 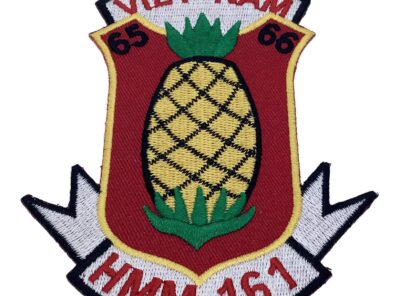 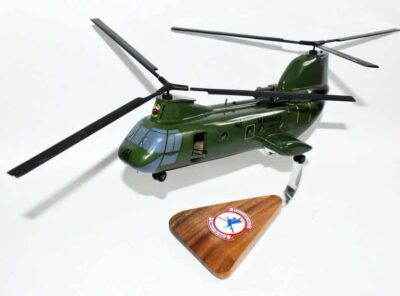 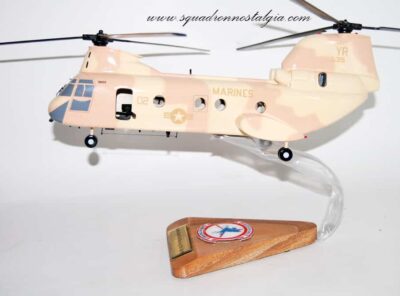 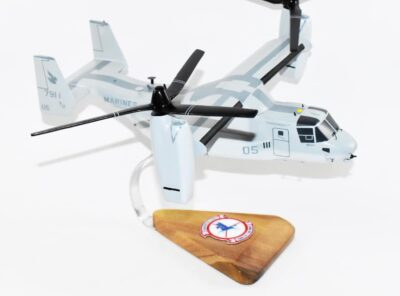 Fly with the VMM-161 Greyhawks in this handcrafted MV-22 Model. Each model is carefully carved from wood and hand painted to provide unique piece you’ll love.