As the United States increased its presence in the Republic of Vietnam, the Marine Corps reactivated VMO-3 at Marine Corps Air Station Camp Pendleton on 1 August 1966 and assigned it to Marine Wing Support Group 37. The squadron arrived in Vietnam in December 1966 and were now flying the UH-1E. VMO-3 became fully operational at Huế/Phu Bai on 16 January 1967.

In 1966 and for the first half of 1967, the squadron’s radio call sign was “Oakgate,” which sometimes got confused for the term OK. Major Bill Murphy is credited with first using the call “Scarface” while on TAD, and lobbied to have the substantially more macho Scarface designation adopted as VMO-3’s signature when all Marine squadrons in-country changed call signs during the summer of 1967. On November 14, 1967) Major General Bruno Hochmuth, then commanding general of the 3rd Marine Division was killed when a UH-1E Huey from VMO-3 exploded and crashed 5 miles northwest of Huế. Four others also died in this crash.

The squadron assumed a new identity in March 1968 when VMO-3 was re-designated HML-367 and immediately began operations in direct support of ground combat units. Based at Hue and Phu Bai, the squadron flew the Bell UH1E Huey throughout I Corps in support of the 1st and 3rd Marine Divisions, the United States Army, and the Army of the Republic of Vietnam. In addition to the countless other missions flown they most notably supported Operations Medina, Fortress Ridge, Prairie Fire, Project Delta, Sparrow Hawk, Dewey Canyon, Apache Snow, Swift Saber and Lam Son 719.

In addition to participating in the above operations, the Scarface crews also flew near daily missions in support of MACV-SOG on what were then top secret reconnaissance missions deep into Laos.

Squadron assets quickly grew from eighteen aircraft (UH-1E) to twenty five. In 1969, HML-367 exceeded 2,000 flight hours for the month of June. October 1969 saw the departure of Marine Air Group 36 from the Republic of Vietnam. Due to the continued necessity for armed helicopter support, HML-367 remained in Vietnam and was assigned to Marine Aircraft Group 16 (Forward) at Phu Bai.

In December 1969, HML-367 began flying the AH-1G Cobra, thus becoming the first operational “Cobra” Squadron in the Marine Corps. Soon after, all the squadron’s Hueys were transferred to another squadron (HML-167) and replaced with the Bell AH-1G Cobra.

On April 24, 1970, in another show of maintenance magic, the Squadron had all of their twenty five aircraft in an “Up” status. This was the first time a Helicopter Squadron had attained 100% aircraft availability in Vietnam. To celebrate the event, a 25-plane “fly-over” of Marble Mountain was conducted with Plane Captains called on to fill the front seats of all 25 Cobras. Total flight time for Fiscal Year 1970 was 22,378 hours.

Post Vietnam 1970s[edit] In April 1975, HML-367(REIN), with nine UH-1E’s and twelve CH-46’s deployed aboard the USS Midway, the USS Hancock, and Naval Air Station Cubi Point, Philippines in support of Operations Eagle Pull, Talon Vise and Frequent Wind. The squadron participated in the evacuation of Vietnamese and Cambodian refugees from the mainland during both April and May. In June 1975, HML-367 returned to Okinawa and resumed normal operations. In 1976, the squadron took receipt of the new UH-1N and in 1977, AH-1J’s Cobra gunships.

After more than eight years on the island of Okinawa, HML-367 was reassigned to Marine Aircraft Group 39 (MAG-39), 3rd Marine Aircraft Wing, at Marine Corps Air Station Camp Pendleton, California. The majority of squadron personnel stayed behind, having been transferred to other units of the 1st Marine Air Wing. New personnel were selected from the parent command, and by August 1981, unit strength was up to 165 men and 16 aircraft.

1980s & 1990s
During this timeframe the HMLA-367 spent approximately six of each eighteen months split into rotations to Marine Corps Air Station Futenma, Okinawa, Japan as well as attached as Det “A” in Subic Bay, Philippines, and as part of an Aviation Combat Element (ACE) aboard an amphibious assault ship, typically the USS Tarawa (LHA-1) while in rotation with two other squadrons also based at Marine Corps Air Station Camp Pendleton, California.

HMLA-367 also supported combined US Navy & USMC security operations, “Kernel Usher & Kernel Blitz” aboard the USS Tarawa and other naval ships for exercises around the Pacific Coast of California.

Desert Storm/Desert Shield
Shortly after the invasion of Kuwait on 2 August 1990 HMLA-367 was quickly chosen as the Light Attack component for Marine Aircraft Group 70 (MAG-70) in support of Operation Desert Shield/Storm and immediately deployed.

HMLA-367 also had confirmed kills of military targets during the Battle of Khafji on 30–31 January 1991, and during the ground war, Operation Lonesome Dove, which commenced on 24 February 1991.

HMLA-367 accrued confirmed kills of 48 tanks, 24 armored personnel carriers and 23 other troop transport vehicles, trucks, etc., as well as many other military targets, more than any other operational combat squadron during Desert Storm/Desert Storm.

The squadron was deployed for 13 months to Okinawa from 2002–03 and this was followed less than a year later by a deployment to Al Taqaddum, Iraq in support of Operation Iraqi Freedom.

While there, the squadron flew in support of numerous ground units including the 1st Marine Division during the Battle of Fallujah. In the next three years, Scarface would return to Iraq two more times in support of OIF 05-07.2 and OIF 08.1-08.2.

After three deployments to Iraq in only four years, Scarface returned to MCAS Camp Pendleton in November 2008 to transition its Huey pilots to the new UH-1Y, and to prepare for upcoming operations in Afghanistan.

After yet another turnaround of less than a year, HMLA-367 deployed to Afghanistan in October 2009 to support international security and assistance forces during Operation Enduring Freedom. The seven-month deployment was the first combat deployment of the UH-1Y. The squadron’s skills were again put to the test as Scarface simultaneously provided support for seven infantry battalions and participated in the battles for Marjah and Now Zad in the Helmand Province of Afghanistan.

In April 2011 “Scarface” HMLA-367 was the first squadron to have both the newest upgraded four-blade rotor UH-1Y “Yankee” Huey utility helicopter and the AH-1Z “Zulu” Cobra gunships along with a state of the art flight simulator for each helicopter.

In 2012, Scarface moved to its current location of Marine Corps Air Station Kaneohe Bay on island of Oahu in Hawaii. The unit reverted to the venerable AH-1W Super Cobra prior to the relocation to MCAS Kaneohe Bay. They have also conducted numerous deployments as part of the 31st MEU and to Okinawa as part of the Unit Deployment Program (UDP).

Be the first to review “HMLA-367 Scarface Patch – Sew On” 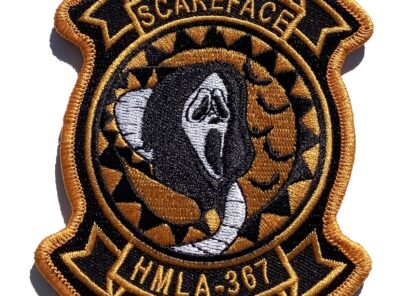 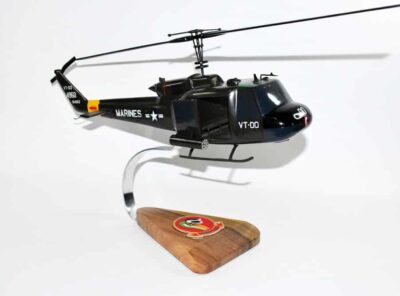 HML-367 Scarface UH-1 (1975) Model Fly with Scarface again in this handcrafted UH-1 Model from 1975. Each piece is carved from wood and hand painted to provide a piece you’ll love. 16 inches As the United States increased its presence … Read More 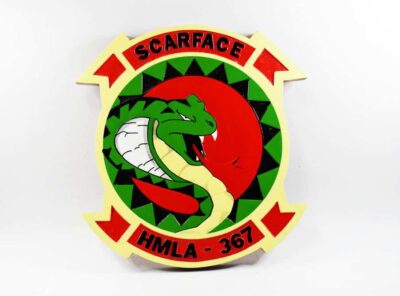 HMLA-367 Scarface Plaque Hang this HMLA-367 Scarface plaque in any space for an authentic wooden carved beauty that will proudly be displayed and enjoyed.  Size: 14 inches The mission of HMLA-367 is to support the MAGTF commander by providing offensive … Read More 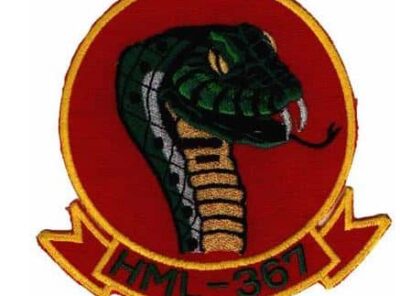 HML-367 Scarface Patch – Sew On 4.5 inch patch As the United States increased its presence in the Republic of Vietnam, the Marine Corps reactivated VMO-3 at Marine Corps Air Station Camp Pendleton on 1 August 1966 and assigned it … Read More 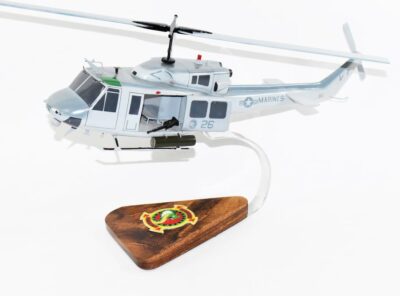 Fly with Scarface again in this handcrafted UH-1N Model. Each piece is carved from wood and hand painted to provide a piece you’ll love. 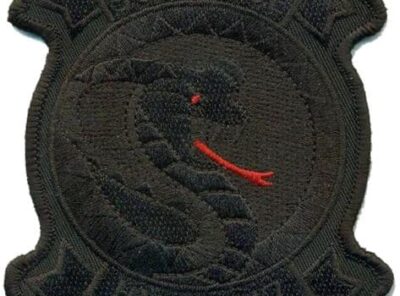 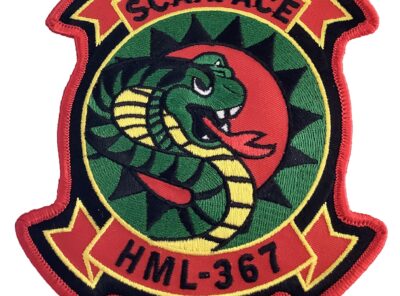 HML-367 Scarface Patch – Plastic Backing As the United States increased its presence in the Republic of Vietnam, the Marine Corps reactivated VMO-3 at Marine Corps Air Station Camp Pendleton on 1 August 1966 and assigned it to Marine Wing Support … Read More 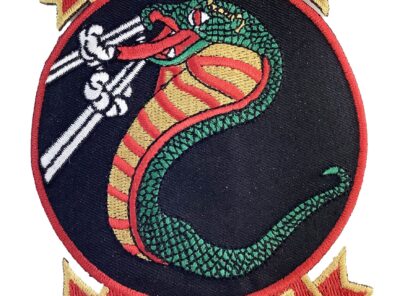 HML-367 Scarface Patch – Plastic Backing 4 inch patch As the United States increased its presence in the Republic of Vietnam, the Marine Corps reactivated VMO-3 at Marine Corps Air Station Camp Pendleton on 1 August 1966 and assigned it to … Read More