Fly in the classic Grumman TBF Avenger Model in this hand crafted recreation. Each model is carved from wood and hand crafted to provide a piece you’ll love.

The Grumman TBF Avenger (designated TBM for aircraft manufactured by General Motors) is an American torpedo bomber developed initially for the United States Navy and Marine Corps, and eventually used by several air and naval aviation services around the world.

The Avenger entered U.S. service in 1942, and first saw action during the Battle of Midway. Despite the loss of five of the six Avengers on its combat debut, it survived in service to become the most effective[citation needed] and widely-used torpedo bomber of World War II. Greatly modified after the war, it remained in use until the 1960s.
Design and development
The Douglas TBD Devastator, the U.S. Navy’s main torpedo bomber introduced in 1935, was obsolete by 1939. Bids were accepted from several companies, but Grumman’s TBF design was selected as the replacement for the TBD and in April 1940 two prototypes were ordered by the Navy. Designed by Leroy Grumman, the first prototype was called the XTBF-1 It was first flown on 7 August 1941. Although one of the first two prototypes crashed near Brentwood, New York, rapid production continued.

The Avenger was the heaviest single-engined aircraft of World War II, and only the USAAF’s P-47 Thunderbolt came close to equalling it in maximum loaded weight among all single-engined fighters, being only some 400 pounds (180 kg) lighter than the TBF, by the end of World War II. To ease carrier storage concerns, simultaneously with the F4F-4 model of its Wildcat carrier fighter, Grumman designed the Avenger to also use the new Sto-Wing patented “compound angle” wing-folding mechanism, intended to maximize storage space on an aircraft carrier; the Wildcat’s replacement the F6F Hellcat also employed this mechanism.[3] The engine used was the powerful, twin-row Wright R-2600-20 Twin Cyclone fourteen-cylinder radial engine, which produced 1,900 horsepower (1,420 kW).

There were three crew members: pilot, turret gunner and radioman/bombardier/ventral gunner. A single synchronized .30 caliber (7.62 mm) machine gun was mounted in the nose, a .50 caliber (12.7 mm) gun was mounted right next to the turret gunner’s head in a rear-facing electrically powered turret, and a single 0.30 caliber (7.62 mm) hand-fired machine gun flexibly-mounted ventrally (under the tail), which was used to defend against enemy fighters attacking from below and to the rear. This gun was fired by the radioman/bombardier while standing up and bending over in the belly of the tail section, though he usually sat on a folding bench facing forward to operate the radio and to sight in bombing runs. Later models of the TBF/TBM omitted the cowl-mount synchronized 0.30 caliber (7.62 mm) gun, and replaced with twin Browning AN/M2 0.50 caliber (12.7 mm) light-barrel guns, one per each wing outboard of the propeller arc per pilots’ requests, for better forward firepower and increased strafing ability. There was only one set of controls on the aircraft, and no direct access to the pilot’s position existed from the rest of the aircraft’s interior. The radio equipment was massive, especially by today’s standards, and filled the length of the well-framed “greenhouse” canopy to the rear of the pilot. The radios were accessible for repair through a “tunnel” along the right hand side. Any Avengers that are still flying today usually have an additional rear-mounted seat in place of the radios, allowing for a fourth passenger.

The Avenger had a large bomb bay, allowing for one Bliss-Leavitt Mark 13 torpedo, a single 2,000-pound (907 kg) bomb, or up to four 500-pound (227 kg) bombs. The aircraft had overall ruggedness and stability, and pilots say it flew like a truck, for better or worse. With its good radio facilities, docile handling, and long range, the Grumman Avenger also made an ideal command aircraft for Commanders, Air Group (CAGs). With a 30,000 ft (9,000 m) ceiling and a fully loaded range of 1,000 miles (1,600 km), it was better than any previous American torpedo bomber, and better than its Japanese counterpart, the obsolete Nakajima B5N “Kate”. Later Avenger models carried radar equipment for the ASW and AEW roles.

Escort carrier sailors referred to the TBF as the “turkey” because of its size and maneuverability in comparison to the F4F Wildcat fighters in same airgroups.

Be the first to review “Grumman TBF Avenger Model” 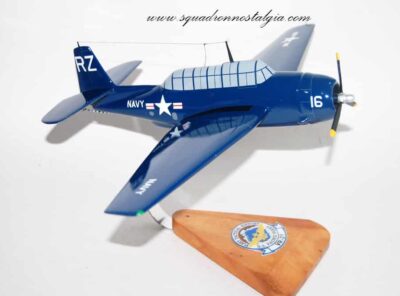 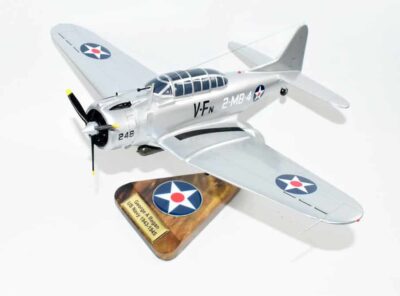