Fly with this hand crafted Cessna Citation XLS Model. Each model is carved from wood and hand painted to provide a piece you’ll love.

With the success of Cessna’s high-end Citation VII, the manufacturer saw a market for an aircraft with the Citation X’s features but aimed at a more traditional market, where it would chiefly compete with twin-turboprop aircraft.

The project was announced at the annual NBAA convention in October, 1994, and the prototype aircraft took off on its first flight on February 29, 1996. Federal Aviation Administration certification was granted in April 1998, by which time Cessna had over 200 orders for the aircraft. Its unit cost in 1999 was US$8.7M.[2] By the time the 100th Excel was delivered in August 2000, an aircraft was coming off the Wichita production line every three days. A total of 308 were built before production switched to the Citation XLS.

The Citation XLS was the first “makeover” that the Excel received, with deliveries beginning in 2004. Besides a glass cockpit based on the Honeywell Primus 1000 EFIS avionics suite, the XLS featured the upgraded PW545B engines with increased performance. It was produced in 330 units. By 2018, ten year old XLS models were trading near $4 million.

The Citation XLS+, or simply “Plus” configuration was another upgraded version of the aircraft which began delivery in 2008, with the inclusion of FADEC engine controls, improved PW545C engines, and a completely revised nose design similar to that found on the Citation Sovereign and Citation X. The Citation XLS+ features Collins Pro Line 21 Avionics and a four screen LCD EFIS display as opposed to the three tube (CRT) Honeywell display in the XL and the three screen LCD Primus 1000 in the XLS.[6] Its unit cost in 2019 was US$13.7M.

Rather than being a direct variant of another Citation airframe, the Excel was a combination of technologies and designs. To produce the Excel, Cessna took the X’s wide, stand-up cabin fuselage, shortened it by about 2 feet (0.61 m) and mated it with an unswept wing utilizing a supercritical airfoil (based on the Citation V Ultra’s wing) and the tail from the Citation V. The Excel has the roomiest cabin in its class of light corporate jets and can seat up to 10 passengers (in high-density configuration; typically the number is six to eight in a corporate configuration), while being flown by a crew of two.

To power the aircraft, Cessna chose the Pratt & Whitney Canada PW500 turbofan. The original version had two cockpit configurations involving where the landing gear was on the panel. With the gear on the left hand side, the MFD was moved to the right slightly and both radios were moved to the right of the MFD next to each other. With the gear handle on the right side, the MFD remained centered with the radios on either side. The Excel uses Honeywell avionics and an optional Auxiliary power unit also powered by Honeywell.

Operators
The aircraft is operated by private individuals, companies, fractionals, charter operators and aircraft management companies. The Swiss Air Force is an operator. NetJets is also a major operator in the United States offering fractional ownership and charter flights. 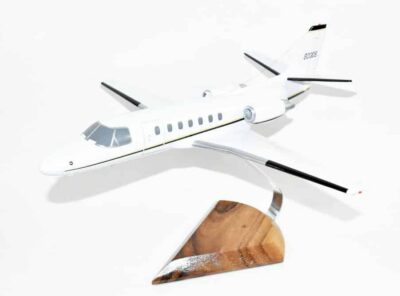