A hand crafted 14 inch plaque of the 732d Airlift Squadron Fly with the Ram. Each plaque is carved from Mahogany and handpainted to provide a piece you’ll love!

Activated as a Boeing B-17 Flying Fortress heavy bomb squadron; trained under Second Air Force. Completed training in early 1943; deploying to European Theater of Operations (ETO) assigned to VIII Bomber Command in England. Engaged in long-range strategic bombardment operations over Occupied Europe and Nazi Germany, March 1944 – May 1945 attacking enemy military and industrial targets as part of the United States’ air offensive against Nazi Germany. Most personnel demobilized in Europe after the German capitulation in May 1945; squadron inactivated as a paper unit in November.

Air Force reserve
Reactivated in 1947 as a Boeing B-29 Superfortress squadron in the reserves, however equipped with trainers until 1949 when equipped with Douglas B-26 Invader light bomber. Squadron activated in 1951 as a result of the Korean War; personnel and equipment assigned as replacements to units of Far East Air Forces, then inactivated as a paper unit.

Reactivated as a reserve transport squadron in 1952, being equipped with Fairchild C-119 Flying Boxcars. Activated during Cuban Missile Crisis in 1962; returned to reserve status after crisis was resolved; inactivated in 1966 with phaseout of C-119 from the inventory.

Activated in 1970 with long-range Lockheed C-141 Starlifters, performing intercontinental airlift of personnel and materiel. The unit upgraded to Boeing C-17 Globemaster IIIs in 2004 after retirement of its C-141s. Most recently, the unit participated in relief efforts after the 2010 Haiti earthquakes.[3]

Be the first to review “732d Airlift Squadron Fly with the Ram Plaque,14″, Mahogany” 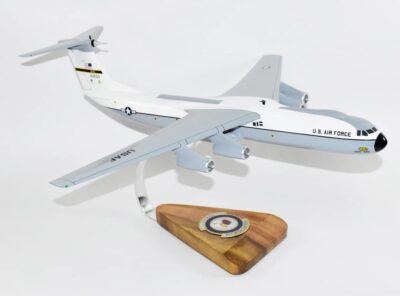 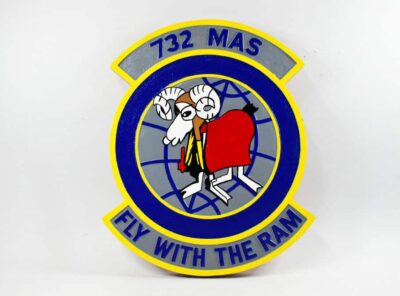