The 63d Fighter Squadron is an active United States Air Force unit, assigned to the 56th Operations Group, at Luke Air Force Base, Arizona. It operates the F-35A aircraft, conducting advanced fighter training since its reactivation in 2016. When this Squadron was reactivated in 1975, their mission was to train pilots and weapons systems officers for the McDonnell F-4E Phantom II, and they switched to the F-4D in 1978.

It was redesignated 63d Fighter Squadron on 15 May 1942, and deployed to England on 9 January 1943. It was declared operationally ready two months later and flew its first combat missions 13 April. The squadron was given fuselage code “LM” and operated from several RAF stations during the war, flying the P-47C Thunderbolt as an VIII Fighter Command bomber-escort unit initially for Boeing B-17 Flying Fortresses and beginning in 1944 for Consolidated B-24 Liberators attacking enemy targets in Occupied Europe. Flying escort for fighter sweeps ahead of U.S. bomber fleets, the pilots destroyed 167.5 enemy aircraft in the air and 110 on the ground. After the end of the war in Europe, the squadron was inactivated on 18 October 1945. 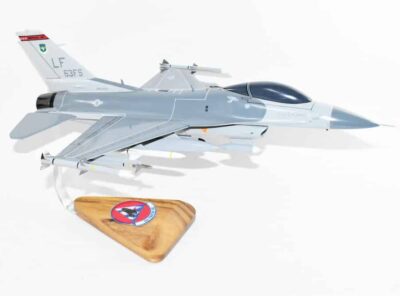