World War II
The squadron was activated at Hamilton Field, California as the 57th Pursuit Squadron on 15 January 1941,[1] as one of the three original squadrons of the 54th Pursuit Group.[2] It trained with Curtiss P-36 Hawks and Curtiss P-40 Warhawks, then moved to Everett Army Air Field, where it served as a part of the air defense force for the Pacific coast during the first few months of World War II.[2] It was formed with a cadre from the 35th Pursuit Group.[citation needed] The squadron was redesignated as a fighter unit in May 1942.[1]

P-39 of the 54th Fighter Group in Alaska
On 20 June 1942, the air echelon of the 54th PG (now FG) took its P-40s and newly assigned Bell P-39 Airacobras to Elmendorf Field, Alaska, where it served in combat against the Japanese forces that invaded the Aleutian Islands during the summer of 1942.[1] The unit did not in itself take any part in the action against the Japanese in the Aleutians, but a detachment of eleven of the pilots saw service with the 42d which was based at Kodiak NAS, Adak and between them got three confirmed victories and two probables.[citation needed] On 4 August 1942, the 57th was moved to Kodiak NAS, Adak and there replaced the 42d. All its pilots were rotated to Adak to gain combat experience.[citation needed] Squadron pilots were credited with the destruction of three enemy aircraft while deployed to Alaska.[3]

The air echelon returned to the United States in December 1942 and rejoined the group, which had been assigned to Third Air Force in LA, and became a replacement training unit (RTU) for North American P-51 Mustang pilots.[1] RTUs were oversized units training individual pilots or aircrews.[4] The unit’s P-39s were to be flown to Duncan Field, Texas for depot-level overhaul.[citation needed] It was reequipped with the North American P-51A Mustang, thereby becoming the first P-51 unit in the AAF.[citation needed]

In early May 1943, the 54th Fighter Group began a split operation, with headquarters and the 56th and 57th Fighter Squadrons relocating to Bartow Army Air Field, Florida,[1][2][5] while the group’s other squadron was at Hillsborough Army Air Field.[6] However, the Army Air Forces (AAF) was finding that standard military units, based on relatively inflexible tables of organization, were proving less well adapted to the training mission. Accordingly, a more functional system was adopted in which each base was organized into a separate numbered unit.[7] As a result, in 1944 the squadron was disbanded as the AAF converted to the AAF Base Unit system.[1] The units at Bartow were replaced by the 340th AAF Base Unit (Replacement Training Unit, Fighter),[8]

Reserve Operations
The unit was reactivated under Air Defense Command (ADC) on 24 March 1947 as an Air Force Reserve fighter squadron at Davis-Monthan Field, Arizona.[1] The unit was not fully manned or equipped. It was inactivated in June 1949[1] when Continental Air Command reorganized its reserve units under the Wing Base Organization system.

57th FIS F-89 Scorpions in 1959.
In March 1953, the squadron was reactivated as the 57th Fighter-Interceptor Squadron, flying the F-89 Scorpions.[9] It was activated at Presque Isle Air Force Base, Maine as the 528th Air Defense Group’s second operational squadron.[1] A second swap of units began when the 82d Fighter Interceptor Squadron arrived from Iceland.[10][11] The 57th FIS then moved to Iceland and was reassigned away from the group in November of the same year.[1] The 57th was reactivated as a regular squadron at Presque Isle AFB, Maine, on 20 March 1953 under Air Defense Command and designated the 57th Fighter-Interceptor Squadron.[1] It was equipped with F-89C Scorpion interceptors, and assigned to the 528th Air Defense Group. It maintained a 24-hour alert at Presque Isle. The squadron was known as “Back Knights of Aroostook” While at Presque Isle, the unit was awarded two Presidential Unit Citations. The unit suffered several air crashes of F89-C aircraft resulting in loss of life. The unit later moved to Iceland.

57th FIS TF-102A-45-CO (56-2367) at NAS Keflavik, in 1969.
Air Force activities at the airport were reorganized and IADF was redesignated Air Forces Iceland, which functioned at a Wing level on 1 July 1960. Shortly afterwards, the USAF transferred jurisdiction of Keflavik Airport to the United States Navy on 1 July 1961 which named it Naval Air Station Keflavik. The Air Force units at Keflavik operated in a tenant status with the 57th Fighter-Interceptor Squadron and two Aircraft Control and Warning Squadrons on 1 July 1961. The USAF facilities remained designated Keflavik Airport.

The first McDonnell Douglas F-4 Phantom II aircraft was assigned to the squadron on 16 April 1973, as TAC was replacing its F-4C’s with F-4E models at the end of the Vietnam War. By 30 June, the squadron. had six F-4Cs and additional F-4s were received in the third quarter of 1974. The last of the F-102s were replaced in early 1975 when additional F-4Cs were received from TAC squadrons at Luke AFB and George AFB; the last F-4C arriving in March 1976. 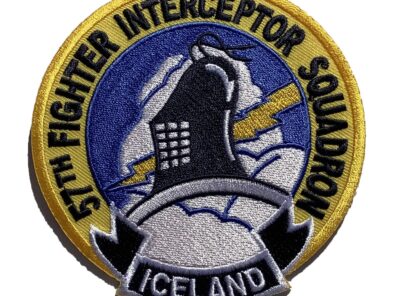 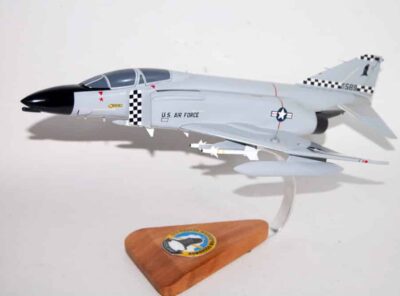