The squadron is one of the oldest in the United States Air Force, its origins dating to 9 August 1917, being organized at Kelly Field, Texas. It deployed overseas to France as part of the American Expeditionary Forces, as an aero construction squadron at the Third Aviation Instructional Center, Issoudun Aerodrome. The squadron saw combat during World War II, and became part of the United States Air Forces in Europe during the Cold War.

World War I
The 55th Fighter Squadron’s roots trace back to 9 August 1917. Originally organized as the 55th Aero Squadron at Kelly Field, Texas, by November the 55th Aero Squadron (Construction) was deployed to Third Aviation Instruction Center on Issoudun Aerodrome, France, then to the American Aerial Gunnery School in St. Jean de Monts on 16 May 1918. The squadron was demobilized on 6 March 1919, following World War I. The squadron was reactivated in November 1930, at Mather Field, California, flying Boeing P-12 aircraft, later joined by DH-4 aircraft in 1931. The squadron moved several times in the next decade, flying the P-26, Curtiss P-36 Hawk, and finally the Curtiss P-40 Warhawk at Hamilton Field.[5]

World War II
At the beginning of World War II, the 55th sent its personnel to units fighting overseas and continued to train aviators for squadrons in Europe and the Pacific. In May 1942, it was redesignated a fighter squadron and switched to the Bell P-39 Airacobra, operating from several locations in the United States before acquiring Lockheed P-38 Lightnings.[5]

The 55th was in the skies over Europe by August 1943, operating from RAF Wittering, England. The squadron flew 175 combat missions with the Lightning before acquiring the North American P-51 Mustang in 1944. With the rest of the 20th Fighter Group, the 55th flew daily strafing, long-range-patrol and bomber-escort missions. In June, they provided air cover during the massive allied invasion of Normandy.[5]

As the war progressed, the 55th performed escort and fighter-bomber missions supporting the Allied advance through Central Europe and the Rhineland. In December 1944, the unit escorted bombers to their targets in the Battle of the Bulge. The squadron’s 175th and last combat mission in the P-51 was flown in April 1945, the day after American and Soviet forces met at the Elbe River. The 55th was demobilized on 18 October 1945, after the war’s end.

55th Fighter-Bomber Squadron Republic F-84F[note 3] The 55th was reactivated on 29 July 1946, at Biggs Field, Texas, flying airpower demonstrations and training operations in the P-51.[5] It entered the jet age in February 1948, switching to the Republic F-84G Thunderjet. In January 1950, it was redesignated the 55th Fighter-Bomber Squadron. The squadron returned to England at RAF Wethersfield in June 1952. The squadron switched to the North American F-100 Super Sabre in 1957 and in 1958 was redesignated the 55th Tactical Fighter Squadron.[5]

The 55th moved with the 20th Tactical Fighter Wing to RAF Upper Heyford in June 1970. The next April, the 55th received its first F-111E Aardvark, becoming fully operational in November. Throughout the 1970s and 1980s, the 55th participated in countless North Atlantic Treaty Organization and U.S. exercises and operations, helping contain Soviet threats to Europe.[5]

In January 1991, elements of the 55th deployed to Turkey during Operation Desert Storm. They flew more than 144 sorties, amassing 415 combat hours without a loss. These missions neutralized key facilities throughout northern Iraq and helped to liberate Kuwait and stabilize the region.[5] The squadron was inactivated in December 1993.

55th FS F-16 over South Carolina[note 4] It reactivated on 1 January 1994 at its present home, Shaw Air Force Base, flying the Fairchild Republic A-10 Thunderbolt II. In July 1996, the squadron transferred its aircraft to Pope Air Force Base, North Carolina, and stood down.[5]

In July 1997, the 55th made history when it stood up as a combat-ready General Dynamics F-16 Fighting Falcon squadron in only 60 days. It has since made numerous deployments to Southwest Asia, operating against threats in Iraq.

The squadron has earned awards and recognition, including the David C. Schilling Award in 1999 and 2000, as well as the Air Force Association Citation of Honor.[5] 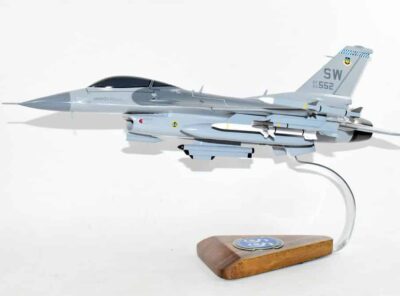 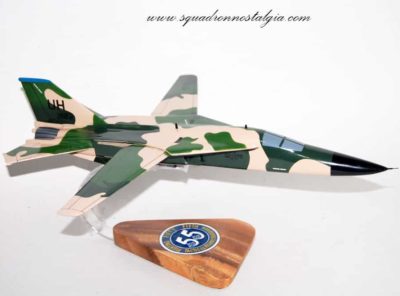