This is a 4″ No Hook and Loop squadron patch of the 4th Recon Bn Marines.

The 4th Reconnaissance Battalion is a reserve reconnaissance battalion in the United States Marine Corps. It falls under the 4th Marine Division and Marine Forces Reserve.

Eniwetok, February–March 1944
Main article: Battle of Eniwetok
See also: VAC Amphib Recon Battalion
The Planning for the seizure of Eniwetok began when the fighting was still taking place on Kwajalein. The D-Day for Eniwetok was scheduled for 17 February 1944. Eniwetok is made up of forty islets or more and was given the operation codename, DOWNSIDE. The preliminary pre-D-Day amphibious reconnaissance was performed by both Captain Edward Katzenbach’s designated 4th Marine Division’s Company D (Scout), 4th Tank Battalion, and Captain James Jones’s Amphibious Reconnaissance Company of the V Amphibious Corps.

The landing plan encompassed four phases, on D-Day, three islets in the north of the atoll were to be seized. Two were to be used for artillery bases, Aistu and Rujioru—codenamed CAMELIA and CANNA. Bogen Island, or ZINNIA, lies north of the islet of Engebi (FRAGILE). ZINNIA was tasked to be seized by Katzenbach’s 4th Division Scouts while Jones’s company was ordered to recon and seize CAMELIA and CANNA. Katzenbach and his scouts fought the heavy surf and fierce 25-knot winds, which instead forced them to land on an island next to ZINNIA. By 0327 on D+1, the scout Marines crossed over to Bogen and declared it secured.

General Thomas E. Watson, assistant division commander of 4th Marine Division, ordered both the amphib recon and scout companies to continue reconnoitering, seizing and clearing other islands in the atoll, moving south toward the islet of Japtan, or LADYSLIPPER. While VAC Amphib Recon Company were operating on Parry island, or LILAC, in the eastern-side, Katzenbach’s Scouts were clearing the islands and coral outcroppings on the western-side of DOWNSIDE. Once Katzenbach reached the larger islet of Rigii (POSY), 20 miles west of LILAC, and were engaged by hostile fire from the Japanese defenders; the scouts killed nine Japanese before declaring POSY secured.

After the seizure of both Aitsu and Rujioru, artillery emplaced on the two islands and were used in fire support for the occupation landing forces on Engebi, or FRAGILE. General Watson attached the 2nd Separate Tank Company from 22nd Marines and Captains Jones’s and Katzenbach’s recon and scout companies to the Army 106th Infantry Regiment (less 2nd Battalion) and designated the reinforced unit as 3rd Battalion, 106th Infantry (3/106) as reserve.

At 0908, the Marines hit the beach for the main assault of 1st and 2nd Battalions of 22nd Marine Regiment. Third Battalion were called in early to follow in trace. At 1230, both the VAC Amphib Recon Company and 4th Division Scout Company were ordered to augmented the 22nd Marines. Jones’s company reported to 1st Battalion and Katzenbach’s company reported to 2nd Battalion, both landing at 1320. On 23 February 1944, the Eniwetok Atoll was declared secured, closing Operation DOWNSIDE.

Iwo Jima, February 1945
Main article: Battle of Iwo Jima
Before the operations of Iwo Jima, two officers and twenty enlisted scout-recon Marines from the scout and sniper platoons of 4th and 5th Marine Division and three amphib recon Marines from Company B of VAC Amphib Recon Battalion, FMFPAC were detached to composite together a “provisional amphibious reconnaissance group” made up of recon Marines and four Underwater Demolition Teams (#12, #13, #14 and #15). The reason was to expedite the passage and briefing of raw beach and enemy information to their own respective parent operations (S-3) and intelligence (S-2) staffs. Embarking on USS Blessman (DE-69) the augmented recon and UDT team, along with the four UDTs embarked on high-speed transport ships USS Bull (DE-693), USS Bates (DE-68), and USS Barr (DE-576), and headed to Iwo Jima, arriving just off the eastern beaches of Iwo Jima on the morning of 17 February 1945, two days prior to D-Day (D-2).[1]

Naval gunfire support commenced from battleships USS Idaho (BB-42), USS Nevada (BB-36) and USS Tennessee (BB-43) and by 1025, Admiral William Blandy ordered the fire-support battleships to retire and clear the approach lanes for the UDT and recon Marines. The UDT and Marines were tasked with taking photographs of the beaches and enemy defenses, if possible. At 1100, the four APDs slowed and dropped the Higgins boats, launching their rubber boats. While they made their preliminary landing toward shore, they immediately encountered enemy fire. Evading fire, they made their way to the beachhead, every one of the twelve landing personnel carriers were either hit or sinking. After completing their photo reconnaissance, they made their way on the remaining landing craft still floatable and returned to the APDs.

Korean War
In 1950, with the outbreak of the Korean War the Marine Corps Reserve was activated. San Antonio Marines joined the mobilization via troop train to Marine Corps Base Camp Pendleton, California in July 1950. 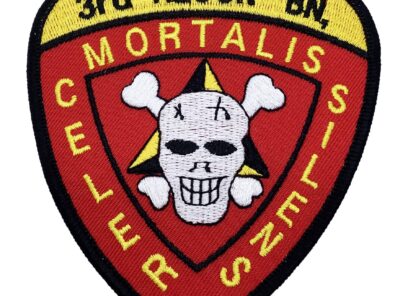 A 4″ Plastic Backing Squadron Patch of the 3rd Reconnaissance Battalion. 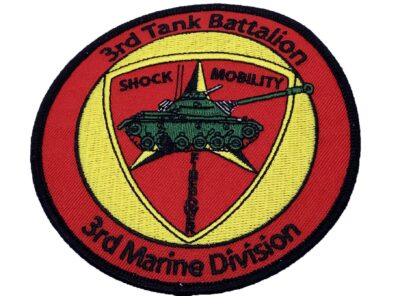 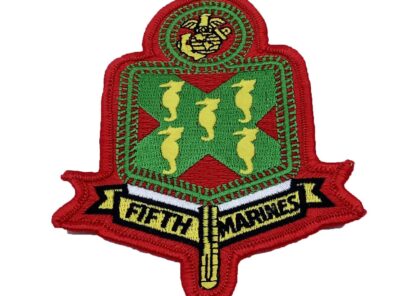