The 495th Fighter Squadron (495th FS), nicknamed the Valkyries, is part of the 48th Fighter Wing at RAF Lakenheath, United Kingdom. Having been reactivated on 1 October 2021, it became the first overseas United States Air Force squadron to operate the Lockheed Martin F-35A Lightning II on 15 December 2021.

The unit had previously operated the General Dynamics F-111F Aardvark at RAF Lakenheath between 1977 and 1991.

History
World War II
Activated as a Southeastern Air District Army Air Corps training squadron, equipped with a variety of second-line aircraft, both single and twin engine, preparing its pilots and maintenance crews for eventual combat. After the Pearl Harbor Attack, the squadron flew antisubmarine patrols[3] from, March–April 1942. Resumed aircrew training, many of the group’s members went on to serve in squadrons stationed in Europe and the Pacific theaters.

Eventually coming under the AAF III Fighter Command in 1944, trained replacement pilots with Republic P-47 Thunderbolts, inactivated in 1944 with the end of RTU training.

The 495th was reactivated on 1 April 1977 as the 495th Tactical Fighter Squadron, becoming the fourth tactical fighter squadron with the 48th Tactical Fighter Wing at RAF Lakenheath, England. This was 33 years to the day since the squadron’s inactivation. The 495th mission was as a replacement training unit for General Dynamics F-111F Aardvark pilots and Weapon Systems Officers (WSO) assigned to the three combat fighter squadron at RAF Lakenheath.

The 495 TFS participated in Operation El Dorado Canyon on 15 April 1986, the air raid against Muammar Gaddafi’s Libyan government due to its involvement in the West Berlin discotheque bombing ten days prior.[4] The mission was successful, however one of the squadron’s F-111Fs (70-2389), callsign ‘Karma 52’, was shot down over the Gulf of Sidra, killing pilot Capt. Fernando L. Ribas-Dominicci and WSO Capt. Paul F. Lorence.[5]

In 1990, the 495 TFS deployed crews to augment the three deployed squadrons from the 48 TFW to Taif Air Base, Saudi Arabia, as part of Operation Desert Shield which was in response to the Iraqi invasion of Kuwait.[6] The squadron suffered a loss on 15 October 1990, when F-111F 74-0183 crashed during a night time training mission, killing pilot Capt. Art Reid and WSO Capt. Thomas Caldwell.[7][8] 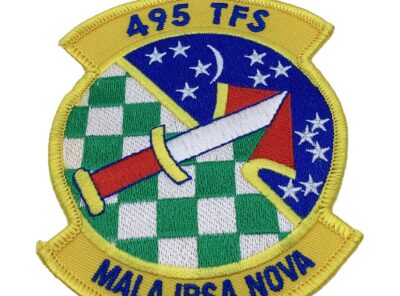 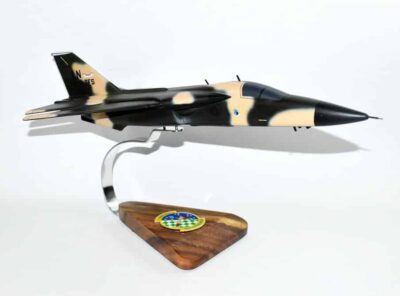