The 459th Air Refueling Wing is a wing of the Air Force Reserve Command of the United States Air Force. It is assigned to the Fourth Air Force and stationed at Joint Base Andrews, Maryland. If mobilized, the wing would be gained by the Air Mobility Command. The wing flies and maintains Boeing KC-135 Stratotankers, providing air refueling.

The wing, over the years, is a six-time recipient of the Air Force Outstanding Unit Award. There are about 1,200 traditional Reservists stationed at the wing. A full-time civilian and Air Reserve Technician staff of approximately 230 personnel provide wing day-to-day administration and management.

Activation in the Air Force Reserve
The reserve flying mission began at Andrews Air Force Base in the summer of 1954, when the 756th Troop Carrier Squadron was activated and equipped with Curtiss C-46 Commando aircraft and began training under the supervision of the 2259th Air Force Reserve Combat Training Center.[2][5] Nearly 8 months later, the unit had grown enough to activate its parent, the 459th Troop Carrier Wing.[2]

In the summer of 1956, the wing participated in Operation Sixteen Ton during its two weeks of active duty training. Sixteen Ton was performed entirely by reserve troop carrier units and moved United States Coast Guard equipment From Floyd Bennett Naval Air Station to Isla Grande Airport in Puerto Rico and San Salvador in the Bahamas. After the success of this operation, the wing began to use inactive duty training periods for Operation Swift Lift, transporting high priority cargo for the Air Force and Operation Ready Swap, transporting aircraft engines between Air Materiel Command’s depots.[6]

In 1958, the 2259th Center was inactivated[7] and some of its personnel were absorbed by the wing. In place of active duty support[note 2] for reserve units, ConAC adopted the Air Reserve Technician program, in which a cadre of the unit consisted of full-time personnel who were simultaneously civilian employees of the Air Force and also held military rank as members of the reserves.[8]

Detached Squadron Concept
During the first half of 1955, the Air Force began detaching Air Force Reserve squadrons from their parent wing locations to separate sites. Communities were more likely to accept the smaller squadrons than the large wings and the location of separate squadrons in smaller population centers would facilitate recruiting and manning. The wing’s 757th Troop Carrier Squadron, which was activated in April 1955 was located at Byrd Field, Virginia, rather than at Andrews.[9] was one of the first three squadrons activated under this program.[10] When the wing activated its third flying squadron, the 758th Troop Carrier Squadron, in 1957, it was located at Greater Pittsburgh Airport, Pennsylvania. In November 1957, the 757th relocated from Byrd Field, which also hosted an Air National Guard group, to Youngstown Municipal Airport, Ohio.[9]

In April 1959, the wing reorganized under the Dual Deputy system. Its 459th Troop Carrier Group was inactivated[11] and the 756th, 757th and 758th Troop Carrier Squadrons were assigned directly to the wing.[2]

Activation of groups under the wing
Although the dispersal of flying units was not a problem when the entire wing was called to active service, mobilizing a single flying squadron and elements to support it proved difficult. This weakness was demonstrated in the partial mobilization of reserve units during the Berlin Crisis of 1961 To resolve this, at the start of 1962, ConAC determined to reorganize its reserve wings by establishing groups with support elements for each of its troop carrier squadrons. This reorganization would facilitate mobilization of elements of wings in various combinations when needed. However, as this plan was entering its implementation phase, another partial mobilization occurred for the Cuban Missile Crisis. The formation of troop carrier groups was delayed until January for wings that had not been mobilized.[12] The 909th Troop Carrier Group at Andrews, the 910th Troop Carrier Group at Youngstown, and the 911th Troop Carrier Group at Pittsburgh were all assigned to the wing on 17 January.[2]

Airlift Operations
On 1 July 1966, the 459th was redesignated the 459th Military Airlift Wing and converted to a strategic, long-range mission with the Douglas C-124 Globemaster II aircraft.

In June 1971, the 459th converted to the Lockheed C-130 Hercules and was redesignated as the 459th Tactical Airlift Wing. In December 1974, with the consolidation of all Air Force strategic and tactical airlift resources under a single manager, the 459th’s active duty gaining command switched from Tactical Air Command to Military Airlift Command.

In July 1986, the wing converted to the Lockheed C-141B Starlifter aircraft and became the first Air Force Reserve unit to be equipped with own C-141s. The conversion resulted in an increase of wing personnel at Andrews from 900 to a level of almost 1,600.

In 1989, a 459th C-141 was the first aircraft to fly troops and supplies into Howard Air Force Base, Panama during Operation Just Cause; the following year the wing was named the Air Force Reserve Outstanding Unit of the Year by the Air Force Association. In August 1990 wing aircrews were some of the first reservists activated in Support of Operation Desert Shield and many additional members were called to active service at the start of Operation Desert Storm with many deployed through the summer of 1991.

Post Cold War era
In 1993, the 459th continued to support Operation Restore Hope and mobilized members in support of the operations in Somalia. The wing provided humanitarian airlift relief in Rwanda and in support of the Cuban refugees at Naval Base Guantanamo Bay, Cuba. In addition, 459th personnel supported Operation Uphold Democracy in Haiti as well as various other significant missions around the globe.

The 459th has been engaged in the Global War on Terrorism since September 2001. As a result of these operations, the Wing has participated in places around the globe to include: Iraq, Afghanistan, Qatar, Cuba, Bosnia, Kosovo, Turkey and Guam. Re-designated in 2003 as an air refueling wing, the 459th is equipped with KC-135Rs. 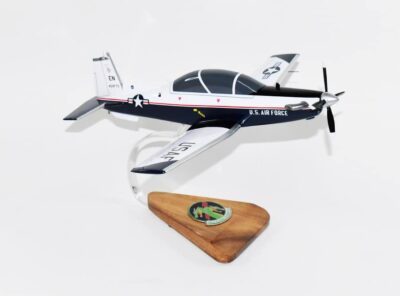 Solo again in the T-6 II with Twin Dragons 459 FTS. This 12 inch model is a must have for any Air Force Aviator and makes the perfect gift after soloing!