The 43d Fighter Squadron is part of the 325th Fighter Wing at Tyndall Air Force Base, Florida. It conducts advanced fighter training for F-22 Raptor pilots.

World War I
The 43d Fighter Squadron traces its lineage to the 43d Aero Squadron, first activated 13 June 1917, at Camp Kelly, Texas. In March 1918, the squadron moved to England, where it trained until reassigned to France where it landed on 25 October, reaching on the same day the Air Service Replacement Concentration Barracks at St. Maixent. Ordered to 3rd Aviation Instruction Center, the squadron arrived at the Issoudun Aerodrome on 1 November. The Armistice signed on 11 November made it redundant, and it stayed at Issoudun until early 1919, when it moved to the harbor of Bordeaux, France, leaving France on 18 March, bound for the United States[3][2]

Inter-war years
The 43d was reactivated on 22 July 1922, at Kelly Field, Texas, and was redesignated the 43d School Squadron in January 1923. The squadron flew various aircraft, including the DH-4, Spad XIII, SE-5, MB-7, AT-4, AT-5, PW-9, P-1, and P-12. The 43d became known as the “Hornets” as depicted by their emblem, a poised Vespa Maculata, or American “Yellow Jacket,” the most formidable of the wasp family, surrounded by an ovate cloud. The emblem was approved in 1924 and the Hornet signifies the speed, agility and hard-hitting capabilities of the squadron while the cloud represents their domain – the skies.[2] In March 1935, the 43d was redesignated the 43d Pursuit Squadron, flying as part of the 3d Wing Advanced Flying School until it was inactivated in September 1936.

43d Fighter Squadron P-40N Warhawk, Howard Field, Canal Zone, May 1944
Re-established in 1939 as the 43d Pursuit Squadron (Interceptor) and activated on 1 February 1940 at Albrook Field, Panama Canal Zone. This unit was part of the build-up of the Canal Zone’s defenses as war approached. Assigned to the 16th Pursuit Group (Interceptor), and equipped with Curtis P-36A Hawks. In July 1941, the Squadron began to convert from P-36A’s to new Curtiss P-40 Warhawks and, upon completion of this conversion, “A” Flight was transferred to the Top Secret “Project X” on 18 August. This, of course, was the reinforcement of Trinidad. Another flight later moved on to Zandery Field, Surinam, by January 1942.

After the Japanese Attack on Pearl Harbor, the unit moved to La Joya #1 (Pacora) Airfield in Panama in January 1942. In Panama, the squadron was assigned to the Panama Interceptor Com¬mand (PIC). Re-designated as the 43d Fighter Squadron on 13 June 1942. On 20 August, the squadron began re-equipping with the new Bell P-39 Airacobra, while the Zandery Field and Trinidad detachments remained. active with P-40Cs On 1 September the detachments aircraft were reassigned to the XXXVI Fighter Command, Antilles Air Task Force, although its personnel returned home to the main body of the Squadron.

Operating air defense patrols throughout 1943 from La Joya, pn 9 February 1944, the Squadron finally moved to Howard Field, having been deployed to an auxiliary base longer than any other Squadron in Sixth Air Force. In March, the Squadron was selected to serve as a “model” squadron for the Brazilian 1st Fighter Squadron, which was in training with the 30th Fighter Squadron at Aguadulce Field. During this operational observation, four Brazilian officers and 36 enlisted men were briefly attached to the Squadron. Moved back to Howard Field in August 1943. One more move was made to France Field on 10 January 1945, replacing the 32d Fighter Squadron.

Unit activities ran down with the end of the war in Europe in May 1945. The squadron ceased all flying activities in June. By October 1945, the squadron was reduced to a non-operational administrative organization. Inactivated on 15 October 1946.

McDonnell Douglas F-4E-35-MC Phantom II, AF Serial No. 67-0305 of the 43d TFS.
The squadron lay dormant nearly two decades before it was awakened as the 43d Tactical Fighter Squadron at MacDill Air Force Base, Florida, in January 1964 flying the F-84 Thunderstreak. The Hornets converted from the F-84 to the F-4 Phantom II, and in August 1965, deployed to Clark Air Base, Philippines, where they were in reserve support to the 47th Tactical Fighter Squadron who were flying combat missions over Southeast Asia from Ubon Royal Thai Air Force Base, Thailand.[2]

In November 1965, the Hornets became the first fighter squadron assigned to Cam Ranh Air Base, South Vietnam, with an advance party arriving on 28 October. During its time in Southeast Asia, the squadron flew 1,207 combat missions and earned the Air Force Outstanding Unit Award for its service. In January 1966, the 43rd TFS returned to MacDill AFB, to serve as an F-4 replacement-training unit until March 1970.[2]

An F-22 observes as an F-15 Eagle banks left. The F-22 is slated to replace the F-15C/D.
In June 1970, the 43 TFS was moved to Elmendorf Air Force Base, Alaska, under the 21st Tactical Fighter Wing. The squadron was one of two units assigned to Alaskan Air Command. Flying the F-4E Phantom II, the 43d inherited a dual mission of Alaskan air defense and close air support for U.S. Army forces. In addition to flying out of Elmendorf AFB in Anchorage, the squadron also sat air defense alert at King Salmon, Galena, and Eielson AFB forward operating bases.

The squadron assumed North American Aerospace Defense Command air defense alert in October 1970 and between 1970 and 1982, the squadron’s pilots intercepted more than 100 Soviet aircraft in Alaskan air space.[2] In 1976 the 43rd TFS won the Hughes Trophy for the best air-to-air squadron in the United States Air Force.

In 1982, the 43d became the first squadron to convert to the F-15 Eagle. Without help from a combat ready unit, the squadron developed its own F-15 training program and completed the first ever F-15 low runway condition reading tests. The squadron continued to provide air defense for North America until 1 January 1994, when it was inactivated.[2]

Return to fighter training
On 25 October 2002, The 43d Fighter Squadron was reactivated with a new mission and a new aircraft. Assigned to the 325th Fighter Wing, Air Education and Training Command, Tyndall Air Force Base, Florida, the 43 FS is the first squadron to provide training for Air Force pilots in the F-22 Raptor.[2] The squadron transitioned to Air Combat Command when the 325th Fighter Wing assumed an operational mission, however the 43 FS continued to train Raptor pilots. 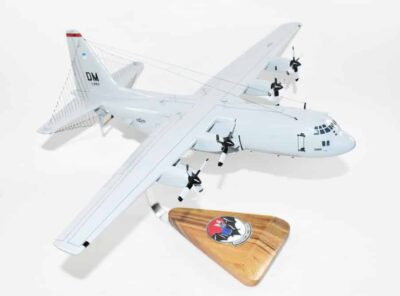 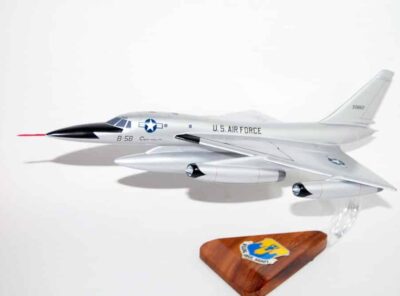 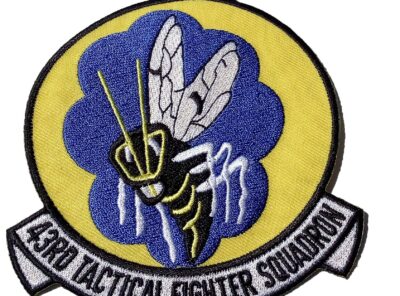 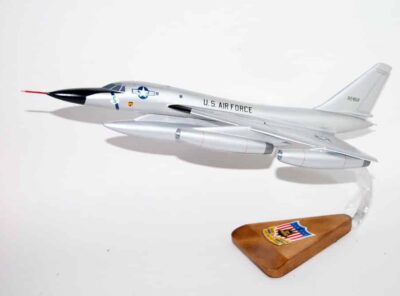 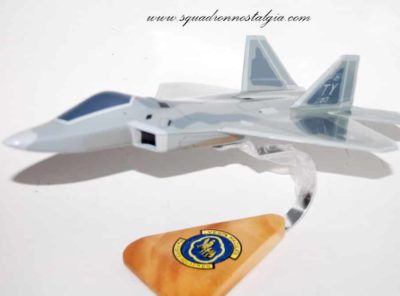 43rd FS Hornets F-22 Fly with the Hornets of the 43rd FS in this hand crafted F-22 model. Each piece is carefully carved from wood and hand painted to provide a piece you’ll love. World War I The 43d Fighter … Read More 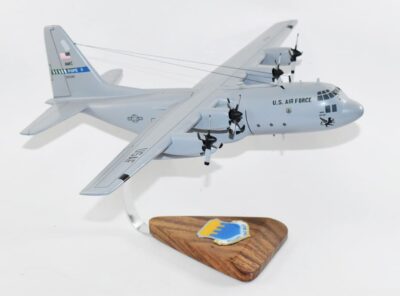