Fly with the 438th Military Airlift wing in this hand crafted C-141 Starlifter model. Each piece is carved from wood and hand painted to provide a piece you’ll love.

Air Force Reserve
In 1949 Continental Air Command reorganized its reserve units under the wing base organization, which placed support units under the same headquarters as the combat group they supported. As part of this reorganization, the 438th Troop Carrier Wing was activated at Offutt Air Force Base, Nebraska. The wing absorbed the resources of the 381st Bombardment Group, which was simultaneously inactivated at Offutt. Although the wing’s manning, along with that of its component squadrons, was limited to 25% of active duty organization authorizations, it was assigned four squadrons, rather than three. The wing trained under the 2473d Air Force Reserve Training Center for troop carrier operations with the C-46, but also flew the North American T-6 Texan trainer.

Little more than a year later the wing was redesignated the 438th Fighter-Bomber Wing and activated at Billy Mitchell Field, Wisconsin, replacing the 924th Reserve Training Wing there. The reserve mobilization for the Korean War, however, had left the Reserve without airplanes, and the unit did not receive aircraft until July 1952. When it finally began to receive its planes, they were World War II era North American F-51 Mustangs, which would serve until the group’s Lockheed F-80 Shooting Stars arrived. Once more, the 2473d Air Force Reserve Training Center was responsible for the training of the 438th Wing and other units at the station. Despite its designation as a fighter bomber unit, the group initially trained in the air defense role.

In 1957 the group began to upgrade to the North American F-86 Sabre. However, its time with this plane would be short. By 1956, the Joint Chiefs of Staff were pressuring the Air Force to provide more wartime airlift. At the same time, about 150 Fairchild C-119 Flying Boxcars became available from the active force. Consequently, in November 1956 the Air Force directed Continental Air Command to convert three fighter bomber wings to the troop carrier mission by September 1957. The wing inactivated one of its squadrons on in July and completed its inactivation on16 November 1957, when most of its personnel transferred to the 440th Troop Carrier Group, which was simultaneously activated.

Strategic Airlift
The 438th Military Airlift Wing replaced the 1611th Air Transport Wing at McGuire Air Force Base, New Jersey in January 1966, equipped with Lockheed C-141 Starlifters. For the next 30 years, the 438th MAW and transported military cargo, mail and passengers worldwide, particularly in the Eastern United States, Atlantic, European and Mediterranean areas, with frequent special missions to the Arctic, the Antarctic, South America, the Far East, and to Southeast Asia combat areas during the Vietnam War.

On 1 December 1991, the wing was redesignated as the 438th Airlift Wing and implemented objective wing. On 1 June 1992, it was assigned to the new Air Mobility Command.

Post Cold War
On 1 October 1993, the 30th AS was moved without personnel or equipment (w/o/p/e) to the 374th Operations Group, Yokota AB, Japan, replacing the 20th AS as part of the Air Force illustrious units realignment. It was replaced by the 13th Airlift Squadron at McGuire which was transferred without personnel or equipment from the 18th Operations Group, Kadena AB, Okinawa.

A KC-10 air refueling squadron, the 2d ARS, was assigned to the wing from the former 2d Bomb Wing at Barksdale AFB, Louisiana as part of a major Air Force realignment on 1 October 1994 to have KC-10 bases with two squadrons of 10 aircraft each.

On 1 October 1994, the 438th Airlift Wing was inactivated, being replaced at McGuire by the 305th Air Mobility Wing which was transferred from Grissom AFB, Indiana when Grissom was realigned via a Base Realignment and Closure (BRAC) action to the Air Force Reserve Command as Grissom ARB.

The 438th Air Expeditionary Group was activated after the September 11 terror attacks in 2001. Its people fought in Iraq and trained Iraqis and then moved to Afghanistan to train Afghan airmen at bases around the country.

In 2014 the wing won the Secretary of Defense Award for Excellence in Maintenance Training, Advice, and Assistance of Foreign Security Forces Award in the operational (large) category. 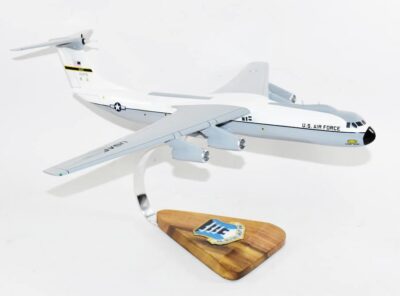 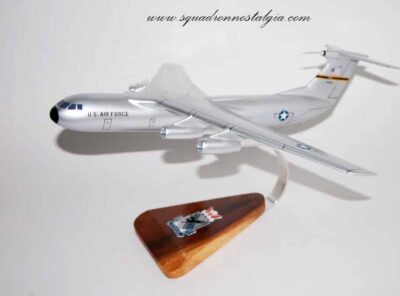 438th OMS McGuire C-141A Fly with the 438th in this handcrafted C-141 model. Each piece is carved from wood and hand painted to provide a piece you’ll love! 18 inches