Fly with the Trailblazers of the 39th Airlift Squadron again in this wooden C-130J model. Each model is carved from wood and hand painted to provide a unique piece you’ll love.

The 39th Airlift Squadron (39 AS) is a United States Air Force unit based at Dyess Air Force Base, Abilene, Texas. The unit flies the Lockheed C-130J Super Hercules.

The 39th conducted paratroop drops on Noemfoor, Luzon, as well as aerial transportation in the Pacific Theater of Operations during World War II. The squadron participated in the Berlin Airlift in 1948. It was part of airlift missions to Grenada, in October 1983, to Panama, December 1989-January 1990, and to Southwest Asia, August 1990-March 1991. Wiki 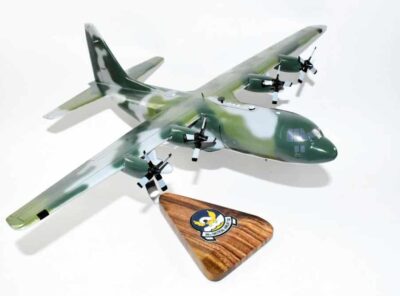