The 311th Fighter Squadron (Sidewinders) is part of the 54th Fighter Group at Holloman Air Force Base, New Mexico which is a geographically separated unit under the 56th Fighter Wing at Luke Air Force Base, Arizona. It operates the General Dynamics F-16 Fighting Falcon aircraft conducting advanced fighter training. The squadron previously operated the Fighting Falcon conducting advanced fighter training at Luke and was inactivated due to budget constraints after the end of the Cold War. It was recently reactivated at Holloman and the aircraft were received from the 309th Fighter Squadron.

The squadron was first activated during World War II to replace the 67th Fighter Squadron, which had been withdrawn from the 58th Fighter Group. After training in the United States, it moved to the Southwest Pacific Theater, earning a Distinguished Unit Citation and a Republic of the Philippines Presidential Unit Citation before inactivating in the Philippines in 1946. It was activated again in July 1952, when it replaced an Air National Guard unit that had been federalized for the Korean War. It earned a Republic of Korea Presidential Unit Citation before the armistice ended combat and remained in Korea until inactivating in 1958.

History
World War II
The 311th Fighter Squadron was constituted on 21 January 1942, as the 311th Pursuit Squadron (Interceptor) and was activated on 9 February at Harding Field, Louisiana, where it flew the Bell P-39 Airacobra and Curtiss P-40 Warhawk aircraft. During 1942 and early 1943 the squadron was both an Operational and a Replacement Training Unit initially under III Fighter Command, being reassigned to I Fighter Command in October 1942. Also was part of the air defense of the Northeast United States, being a component of several air defense fighter wings (Philadelphia, New York, Boston), under First Air Force.

Was converted into an operational squadron in March 1943 at Bradley Field, Connecticut, being re-equipped with Republic P-47 Thunderbolts. Was deployed to the Southwest Pacific Theater, being assigned to Fifth Air Force in Australia in November 1943. Began combat operations in February 1944, providing protection for U.S. bases and escorting transports initially, then escorting bombers over New Guinea and sea convoys to Admiralty Islands. From Noemfoor, bombed and strafed Japanese airfields and installations on Ceram, Halmahera, and the Kai Islands.

Moved to the Philippines in Nov, flew fighter sweeps against enemy airfields, supported U.S. ground forces, and protected sea convoys and transport routes. Beginning in July 1945, attacked railways, airfields, and enemy installations in Korea and Kyushu, Japan from Okinawa. After V-J Day, flew reconnaissance missions over Japan. Moved without personnel or equipment to the Philippines in Dec to be inactivated in January 1946 at Fort William McKinley, Luzon.

Cold War
Reactivated during the Korean War at Taegu Air Base, South Korea, being redesignated the 311th Fighter-Bomber Squadron. First equipped with the Republic F-84G Thunderjet, the squadron adopted the North American F-86 Sabre in 1954 and kept it through 1958. During the Korean War, the squadron flew primarily air-to-ground missions supporting ground operations. The 311th participated in the Korea Summer-Fall 1952, Third Korean Winter, and Korean Summer-Fall 1953 campaigns, the squadron again distinguished itself, earning the Republic of Korea Presidential Unit Citation.

After the armistice in 1953, the squadron was moved to Osan Air Base on 19 March 1955. Remained in South Korea to provide deterrence against any armistice violations by North Korea. Inactivated 1 July 1958 due to budget restraints.

The 311th Fighter Squadron was reactivated in 2014 as a part of the also newly reactivated 54th Fighter Group. The group is an element of the 56th Fighter Wing at Luke Air Force Base, Arizona. 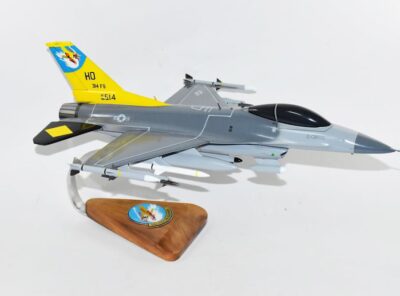 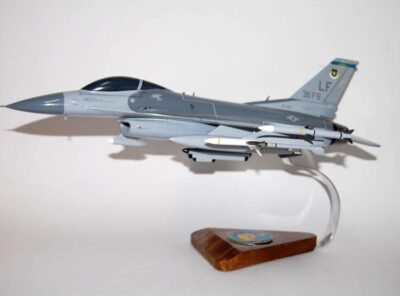 Fly with the 311th Fighter Squadron in this handcrafted F-16 Fighting Falcon Model. Each piece is carved from wood and handpainted to provide a piece you’ll love. 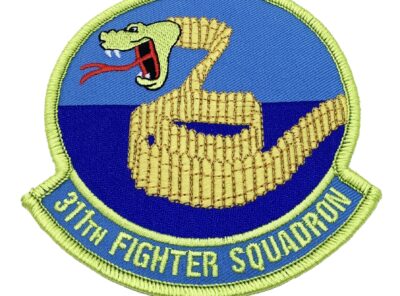