A 4″ with Hook and Loop Squadron Patch of the 310th Fighter Squadron.

A 4″ with Hook and Loop Squadron Patch of the 310th Fighter Squadron.

World War II
The 310th Fighter Squadron was constituted on 21 January 1942, as the 310th Pursuit Squadron (Interceptor) and was activated on 9 February at Harding Field, LA, where it flew the Bell P-39 Airacobra and Curtiss P-40 Warhawk aircraft. During 1942 and early 1943 the squadron was both an Operational and a Replacement Training Unit initially under III Fighter Command, being reassigned to I Fighter Command in October 1942. Also was part of the air defense of the Northeast United States, being a component of several Air Defense fighter wings (Philadelphia, New York, Boston), under First Air Force.

Was converted into an operational squadron in March 1943 at Bradley Field, Connecticut, being re-equipped with Republic P-47 Thunderbolts. Was deployed to the Southwest Pacific Theater, being assigned to Fifth Air Force in Australia in November 1943. Began combat operations in February 1944, providing protection for U.S. bases and escorting transports initially, then escorting bombers over New Guinea and sea convoys to Admiralty Islands. From Noemfoor, bombed and strafed Japanese airfields and installations on Ceram, Halmahera, and the Kai Islands.

Beginning in June 1945, the Mexican squad, Escuadron 201 initially flew missions with the 310th Fighter Squadron, often twice a day, using borrowed U.S. aircraft. It received 25 new P-47D-30-RA aircraft in July, marked with the insignia of both the USAAF and Mexican Air Force. The squadron flew more than 90 combat missions, totaling more than 1,900 hours of flight time. They participated in the Allied effort to bomb Luzon and Formosa to push the Japanese out of those islands.

Beginning in July 1945, attacked railways, airfields, and enemy installations in Korea and Kyushu, Japan from Okinawa. After V-J Day, flew reconnaissance missions over Japan. Moved without personnel or equipment to the Philippines in Dec to be inactivated in January 1946 at Fort William McKinley, Luzon.

Cold War
Reactivated during the Korean War at Taegu Air Base, South Korea, being redesignated the 310th Fighter-Bomber Squadron. First equipped with the Republic F-84G Thunderjet, the squadron adopted the North American F-86 Sabre in 1954 and kept it through 1958. During the Korean War, the squadron flew primarily air-to-ground missions supporting ground operations. The 310th FBS participated in the Korea Summer-Fall 1952, Third Korean Winter, and Korean Summer-Fall 1953 campaigns, the squadron again distinguished itself, earning the Republic of Korea Presidential Unit Citation.

In the early years of operation with the F-16, the squadron patch was very different and the squadron name was Falcons. Eventually the 310th would return to the patch style used in World War II with a tophat wearing skull with a pair of dice (see patch top of page). The squadron name changed as well to “Top Hats” which it has carried through to today.[3]

In 1988 the 310th TFTS began receiving brand new block 42 F-16C/Ds to replace the F-16A/B. The 310th TFTS became the first unit to receive the block 42 and also became the first F-16 squadron to receive the LANTIRN night vision system. Instructor pilots assigned to the 310th developed and wrote the Replacement Training Unit syllabus for both the Block 40/42 and LANTIRN. They also developed the first LANTIRN tactics. Until the mid-1990s, the 310th was dedicated almost exclusively to the LANTIRN training mission.

Modern era[edit] On 1 November 1991 the 310th was re-designated simply as a Fighter Squadron. Although the word ‘Training’ was dropped, nothing in that role was changed and was the case for all USAF Tactical Fighter Training Squadrons at that time.

During the late 1990s with the growing use of night vision goggles the 310th FS has become the principle trainer in this role. It was several years later that the squadron began training night-vision goggle qualified pilots. Although now well known for night vision training, the 310th FS is also tasked with other pilot training normally in the realms of advanced pilot training. One such program is Forward Air Controller, of which the 310th FS is currently the only squadron in the USAF that trains F-16 pilots in this role. Each class lasts five weeks and includes twelve sorties intended to test technical knowledge of the program. The 310th Fighter Squadron on average graduates thirteen classes of FAC qualified pilots a year.

Beginning in April 2004 the 310th FS was tasked with all night vision goggle training. Pilots going through this training program have to be experienced as the night vision goggles prove to be very challenging. New pilots to the training program have known to follow stars in the sky thinking they are following their flight leader. In bad weather the goggles can be useless as they depend on some source of light. A common training element is to have students fly in a four ship formations on a strike mission having to fight their way in and out against enemy aggressors. In all, a trainee will face three to four weeks of training using the goggles including simulator time and eight sorties in the real jet. Although it fluctuates, the school often turns out 150 night vision goggle trained pilots a year. 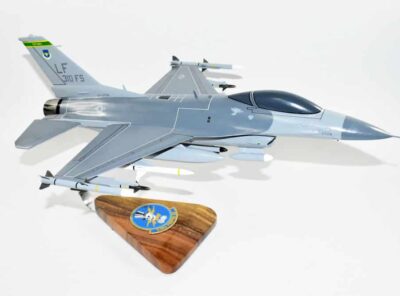 310th FS Top Hats F-16 Fly with the the 310th Fighter Squadron and the Top Hats again in wooden F-16 model. Each model is carved from wood and hand painted to provide a unique piece you’ll love. Length – 18 … Read More 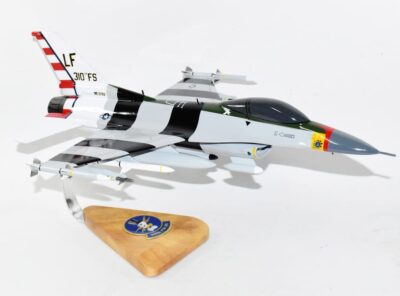 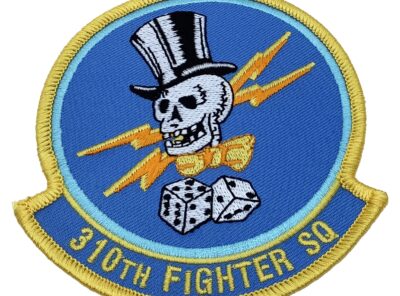 A 4″ Plastic Backing Squadron Patch of the 310th Fighter Squadron. 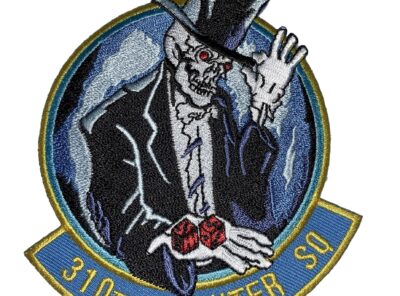