A carefully carved and hand painted plaque of the 30th Airlift Squadron.

The 30th Airlift Squadron is an inactive United States Air Force unit, last assigned to the 19th Airlift Wing. It was the first active-duty associate unit attached to an Air National Guard wing, working with the 187th Airlift Squadron at Cheyenne Regional Airport (National Guard Base), Wyoming. It operated the Lockheed C-130 Hercules aircraft of its co-located Guard unit, conducting airlift missions. The squadron was last active in this role from 2006 until about 1 September 2015.

The squadron was first activated in 1942 as the 30th Ferrying Squadron. It ferried aircraft across the North Atlantic ferry route until it was disbanded in 1943 in a reorganization of Air Transport Command units. The squadron was reactivated in 1952 as the 30th Air Transport Squadron. Except for a brief period from 1965 to 1967, it conducted strategic airlift missions throughout the world until 1993, when it moved to Yokota Air Base, Japan and conducted aeromedical airlift missions until inactivating in 2003.

History
World War II
The squadron was first activated at Presque Isle Army Air Field, Maine in late July 1942 as the 30th Ferrying Squadron, one of the original squadrons of the 8th Ferrying Group. In August, the 8th Group squadrons were moved to various bases along the North Atlantic ferrying route and the squadron moved to Bluie West One, at Narsarsuak, Greenland. The 30th ferried bombers and Lockheed P-38 Lightning aircraft until August 1943.[1] On 1 September 1943, the squadron, now titled the 30th Transport Squadron, was disbanded, and its personnel and equipment transferred to Station 11, North Atlantic Wing, Air Transport Command.

In July 1952 Military Air Transport Service replaced its Major Command Controlled air transport squadrons (4 digit) with Air Force Controlled squadrons that were able to continue their history if they were temporarily inactive.[note 1] Implementing this program, the 30th, now the 30th Air Transport Squadron was activated at Westover Air Force Base, Massachusetts, where it was assigned to the 1600th Air Transport Group and took over the personnel and eight Douglas C-74 Globemaster aircraft of the 1253d Air Transport Squadron, which was discontinued. The squadron began to convert to Douglas C-54 Skymaster transports shortly after activation, but this conversion was cancelled and the unit reverted to flying Douglas C-118 Liftmasters in August.

Although the squadron continued to fly C-118s, by 1954, the advent of larger transport aircraft, such as the c-74 and the Douglas C-124 Globemaster II prompted the Air Force to change its designation from a heavy transport squadron to a medium transport unit. In April 1955, Strategic Air Command took over Westover from MATS.[3] The 1600th Air Transport Wing was inactivated, but the squadron moved its operations to McGuire Air Force Base, New Jersey. It provided air transport for the Atlantic Division of the Military Air Transport Service from July 1952 until inactivating in June 1965, when the 1611th Air Transport Wing discontinued its C-118 operations.

The squadron was organized again in April 1967 as the 30th Military Airlift Squadron and equipped with Lockheed C-141 Starlifters. Starting in August, conducted worldwide airlift, including support for the Vietnam War, earning a Republic of Vietnam Gallantry Cross with Palm for its support.

In 1993 the squadron moved to Yokota Air Base, Japan where it flew aeromedical evacuation missions with the McDonnell Douglas C-9 Nightingale until 2003, when the Nightingale was retired and the squadron was inactivated.

Active duty associate
On 8 July 2006 the 30th became the first active-duty associate unit partnering with the Wyoming Air National Guard’s 153d Airlift Wing. As an associate unit, the squadron flies the Lockheed C-130 Hercules aircraft of the 153d Wing on tactical airlift missions in the “Total Force Integration” concept. Although its administrative headquarters is an active duty group, it is under the operational control of the 153d Wing. Housing, medical, and other support is provided by the 90th Mission Support Group at Francis E. Warren Air Force Base. The 153d Wing added five aircraft to support this program, which was implemented as a result of the 2005 Base Realignment and Closure Commission.

Members of the squadron deployed to both Iraq and Afghanistan after its reactivation, including supporting *Operation New Dawn, although the squadron does not appear to have deployed as a unit. In 2014, two consecutive commanders of the squadron were relieved of command, as the unit went through four commanders in less than a year. The reliefs were due to a “lack of confidence” in the commanders involved and the atmosphere in the squadron, although no additional information was publicly released.[8] On 1 September 2015, due to budget cuts, the active duty airmen and their aircraft were withdrawn from Wyoming and the aircraft were transferred to the 152d Airlift Wing of the Nevada Air National Guard by the following month.

Be the first to review “30th Airlift Squadron Plaque,14″, Mahogany” 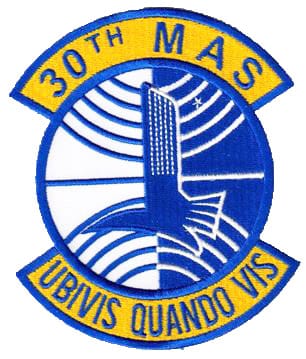 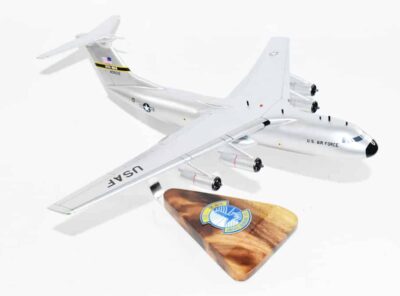