World War II
Initially established under Third Air Force in early 1942 as a fighter squadron at Baer Field, Indiana, flying some antisubmarine patrols in the Gulf of Mexico.

Deployed to the European Theater of Operations (ETO) in June 1942 without aircraft as its Curtiss P-40 Warhawks and Bell P-39 Airacobras were deemed unsuitable for use against German aircraft in long-range bomber escort duties. Was re-equipped with RAF Spitfire Vs and its pilots and technicians spent a two-month period undergoing intensive training in flying and fighting with RAF pilots in the British aircraft from airfields in southeast England. The squadron flew its first combat mission on 18 August 1942, when it attacked enemy positions in occupied France.

Assigned to the new Twelfth Air Force and deployed to Gibraltar in November 1942 as part of the Operation Torch invasion forces, initially operating from former Vichy French airfields in Algeria. Advanced east across Algeria and Tunisia during the North African Campaign, supporting the Fifth United States Army which halted Field Marshal Rommel’s advance on allied positions.

Spitfires from the squadron provided support for Allied Forces as the Invasion of Italy began with the capture of Sicily, and later the landings by Allied forces in Fascist Italy, moving north supporting the Fifth Army during the Italian Campaign. As Allied bomber forces operating from Italy began the strategic bombing of Axis petroleum and communications facilities in central Europe and the Balkans, the squadron was re-equipped with the North American P-51 Mustang to replace the shorter-ranged Spitfire. In August 1944, the P-51’s were involved in the invasion of Southern France.

By war’s end, the squadron had earned two Distinguished Unit Citations and was involved in eight campaigns The squadron was largely demobilized during the summer of 1945 in Europe, a skeleton force returned to Drew Field, Florida in August, inactivating largely as an administrative unit in November.

Reactivated from elements of several inactivating organizations in Germany in August 1946, Performed occupation duty and operating early-model P-80A Shooting Star jets from former Luftwaffe jet-capable airfields at AAF Station Giebelstadt and AAF Station Kitzingen. Returned to the United States in June 1947 without personnel or equipment which remained in Germany.

Cold War
Assigned to Strategic Air Command at Langley Air Force Base, Virginia as a fighter-escort squadron, equipped with straight-winged Republic F-84E Thunderjets. Assigned to Turner Air Force Base, Georgia with mission of long-range escort of Boeing B-29 Superfortress bombers, later Boeing B-50 Superfortress and Convair B-36 Peacemakers as newer aircraft came into operation by SAC.

Relieved from assignment to SAC and made non-operational in 1957 with phaseout of B-36 and end of SAC escort fighter concept. On 1 April 1957 the parent 31 SFW was transferred back to Tactical Air Command and moved to George Air Force Base, California. Trained in tactical air support of ground forces, deploying to NATO bases for operational exercises. Reassigned to Homestead Air Force Base, Florida after the Cuban Missile Crisis, late 1962 to provide air defense of South Florida.

Was deployed to Southeast Asia, 1964 as part of advisory forces operating against North Vietnamese and Viet Cong forces in South Vietnam.

Reassigned back to TAC at Homestead AFB in 1970, as part of re-establishment of 31st TFW upon its return from duty in Southeast Asia. Equipped with McDonnell F-4E Phantom IIs. Was deployed to Thailand, July 1972, engaging North Vietnamese forces in northern South Vietnam in response to the communist spring offensive. Returned to the United States in the late fall 1972. For the next 20 years, performed routine training and tactical deployments from Homestead AFB. At the end of 1986 the squadron and wing changed tail codes from ZF to HS, which better matched the squadrons location in Homestead. Upgraded to the General Dynamics F-16A Fighting Falcon in 1988, upgrading to receive Shaw AFB block 25s in August 1990. The Gulf War build-up and the 363rd TFW at Shaw Air Force Base deploying to Saudi Arabia meant no more block 25s were available. With some F-16A/B block 15s still in service for the 309th TFS, it continued to operate both types.

When Desert Storm ended it was decided to convert the 31st TFW to block 40 F-16s instead. Up to that point about ten block 25s had reached the 309th FS. They were all sent to other units. Neither of the 31st TFW’s other sister squadrons flew the block 25. In March 1991 the 309th began conversion to the block 40 version of the F-16. On 1 October 1991 the word ‘Tactical’ was dropped and the unit became the 309th Fighter Squadron. By early 1992 the conversion to block 40 F-16s with the general purpose role was complete.

Modern era
The squadron evacuated to Shaw Air Force Base, South Carolina, in August 1992, narrowly escaping the devastation of Hurricane Andrew. It was to be a temporary move to Moody, but Homestead was so heavily damaged it was never re-opened for any of the 31st FW squadrons After destruction of Homestead AFB, was reassigned permanently to the 363d Operations Group at Shaw. At this point the ‘HS’ tail code began to be replaced with a ‘SW’ tail code. When Shaw AFB began converting to the block 50 in 1993, even the 309th FS was involved receiving many examples. Although the squadron began converting to the block 50, it was short lived. The 20th FW at RAF Upper Heyford, England inactivated and moved its Wing and associate squadrons to Shaw AFB. On 31 December 1993 the 363d FW inactivated and the same day the 309th FS inactivated.

Plans were already in the works which involved moving the 309th Fighter Squadron to Luke Air Force Base, Arizona, where it would continue its heritage, this time as a training squadron under the 56th Fighter Wing. The Air Force reactivated the squadron on 1 April 1994, as with the block 25 version of the Viper.

On 1 March 2014, the 311th Fighter Squadron was reactivated as a part of the also newly reactivated 54th Fighter Group at Holloman Air Force Base, New Mexico.[5] The 311th will operate F-16s currently flown by the 309th. Once all of the 309th’s aircraft are transferred to Holloman, the squadron is planned to become inactivate for a time in preparation for Luke’s transition to the F-35 Lightning II. 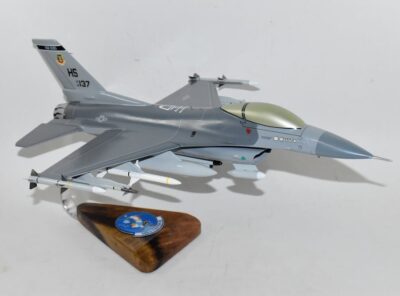 Fly with the 309th FS Wild Ducks Homestead in this hand crafted F-16C Block 40 Model. Each model is carved from wood and hand painted to provide a unique piece that will always be treasured. 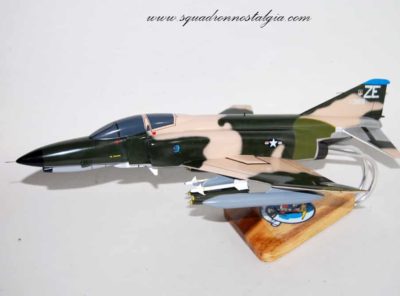