A 4″ inch with Hook and Loop PVC patch of the 26th MEU Green.

The 26th Marine Expeditionary Unit (26th MEU) is one of seven such units currently in existence in the United States Marine Corps. It is an air-ground task force with a strength of about 2,400 personnel when at full strength during a deployment. It consists of four major parts: a command element, a ground combat element, an aviation combat element, and a logistics combat element. Since its establishment in the early 1970s as the 26th Marine Amphibious Unit, it has deployed extensively, and participated in numerous combat and contingency operations, as well as training exercises. The 26th MEU is based out of Marine Corps Base Camp Lejeune in the U.S. state of North Carolina. 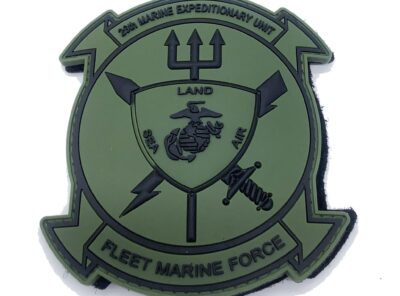