The squadron was originally created as the 25th Pursuit Squadron and activated at Hamilton Field, California on 15 January 1941. By March it was assigned to the 51st Pursuit Group at March Field, California. In July the squadron received Curtiss P-40 Warhawk aircraft.

World War II
The 25th sailed to combat operations in the Pacific Theater aboard the SS President Coolidge on 11 January 1942. The squadron was part of the first deployment of U.S. forces leaving the mainland after the declaration of war. The journey to Melbourne, Australia, took 20 days. By late March the 25th Pursuit Squadron had arrived in Karachi, India, and set up wartime operations.[5]

The 25th flew its first aerial combat mission over The Hump on 25 September 1942, flying a combat escort mission. After the squadron moved to Dinjan Airfield in Assam, India, combat activity increased. Due to the terrain, the pilots would usually “drag in” on their passes. It was there that the 25th picked up the name Assam Draggins.[5]

Operations from Dinjan were concentrated against the Japanese in northern Burma along the upper Chindwin and Irrawaddy Rivers. In February 1943 the 25th Fighter Squadron was tasked to defend Fort Hertz near Myitkyina. Fort Hertz was a vital cog in air operations near The Hump. The 25th bombed and strafed enemy troops, concentrations, supply dumps, bridges, and enemy communication lines for twelve consecutive days, but failed to slow the Japanese advance on Fort Hertz. North American B-25 Mitchell medium bombers were needed to halt the Japanese drive, but none were available. Lieutenant Colonel John E. Barr, the executive officer for the 51st Fighter Group, modified a P-40 to carry 1,000 pound bombs, and by May 1943, the Japanese offensive had been halted.[5]

The 25th Fighter Squadron encountered more combat activity than any other unit within the 51st Fighter Group during the war. The squadron returned to the United States and was inactivated on 12 December 1945.[5]

Postwar
On 15 October 1946, the 25th was reactivated at Naha Air Base, Okinawa, where the squadron was assigned Republic P-47 Thunderbolt and Lockheed P-80 Shooting Star aircraft. As part of the occupation force, the 25th provided defense for the Ryukyu Islands.[5]

New F-80C Shooting Stars at Itazuke Air Base, Japan, 1950[note 2] The 25th was placed on alert when hostilities erupted in Korea in June 1950. The unit moved to Itazuke Air Base, Japan, in September, and to Kimpo Air Base, Korea, by October. The Chinese People’s Volunteer Army intervention in December 1950 forced a retreat of U.N. forces from North Korea into the South. The 25th flew more than 21 sorties each day that month to save the 2nd Infantry Division, which had been cut off by the enemy near Kunuri, from being overrun. Air cover was officially credited with preventing disastrous losses to the division.[5]

Squadron F-86E Sabre at Mangun AB[note 3] After the war, the 25th was assigned to the 51st Fighter-Interceptor Wing at Naha Air Base, Okinawa. While there, the pilots were deployed for one week at a time to Kadena Air Base, Okinawa. From 1960–1965, the 25th Fighter Squadron remained in a state of suspended animation with virtually no mission and only 20 percent manning. On 17 June 1965, the unit was re-designated the 25th Tactical Fighter Squadron and assigned to the 33d Tactical Fighter Wing at Eglin Air Force Base, Florida.[5]

Post Vietnam War – Present
When the Air Force began its withdrawal from Thailand, the 25th was reassigned the 18th Tactical Fighter Wing at Kadena Air Base, Okinawa, where it remained until 1 February 1981. On that date, the 25th was relocated without personnel or equipment to Suwon Air Base, Republic of Korea, and assigned to the 51st Composite Wing.[5]

On 28 January 1982, the 25th received its first Fairchild Republic A-10 Thunderbolt II aircraft. The squadron’s presence helped maintain a peaceful armistice between North and South Korea until 2 October 1989. It was during that time that the 25th began transferring aircraft to the 19th Tactical Air Support Squadron and other stateside units. The 25th was then inactivated on 1 July 1990. On 1 October 1993, the 25th Fighter Squadron was reactivated under the 51st Wing at Osan Air Base, Republic of Korea, under the command of Lieutenant Colonel Syd McPherson. The 25th has since added six A-10 aircraft to its fleet, making it a dual qualified A/OA-10 squadron.[5] 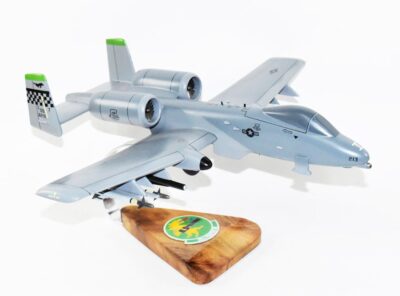 Fly with the Flying Elvises of the 25th FS in the Osan Air Base. Each model is carved from wood and hand painted to provide a piece you’ll love.