World War I
Originally established as an Army Flying School Squadron, the 19th was based in Texas, Ohio, and New York for short periods. After a few weeks at the Air Service Replacement Concentration Barracks in St. Maixent, from 1 January 1918, the squadron moved for Seventh Aviation Instruction Center (repair) at Aulnat Aerodrome, east of Clermont-Ferrand, France, to train and observe the French company Michelin’s airplane manufacture and assembly procedures.[1] It stayed with 7th AIC until the end of 1918. Moving for Cenac, near Bordeaux on 29 December, the squadron left France on 18 March 1919.

Inter-war years
Renamed the 19th Pursuit Squadron, the squadron flew from various locations in the Hawaiian Islands beginning in 1923.

19th Fighter Squadron P-47N Thunderbolt, Ie Shima Airfield, 1945
The squadron suffered six casualties as a result of the attack on Pearl Harbor by the Japanese on 7 December 1941, but no fatalities.

The squadron was then stationed aboard the USS Natoma Bay, off Saipan. Upon arriving, the 19th flew night and day missions, strafing and using general purpose bombs and rockets in support of advancing U.S. ground troops. Using homemade napalm bombs made out of napalm, gasoline, and oil placed inside fuel tanks, the 19th helped U.S. forces successfully invade and capture Saipan, Tinian, and Guam islands in only three months. The squadron’s mission then changed to long-range bomber escort missions with occasional strike missions to nearby Pagan Island and Iwo Jima. The squadron then relocated to Okinawa, where the first 19 FS pilots were awarded their ‘ace’ rating. Later, in August 1945, after numerous aerial victories and assorted bombing missions, it participated in the Japanese surrender.

From 1982–1993, it trained for close air support, air-to-air superiority, and maintained a state of readiness to deploy worldwide. In June 1987, the 19th set a new world record for the number of F-16 sorties flown in one day with 160, besting the previous record of 144. In September 1992 the 19th deployed to Southwest Asia to fly combat air patrol missions to enforce terms of United Nations cease fire agreement following Operation Desert Storm.

Modern era
On 1 January 1994, the 19th took over personnel, facilities and equipment of 43d Fighter Squadron at Elmendorf Air Force Base, Alaska. It won the Hughes Trophy in recognition as the top air superiority squadron in the USAF for 2001. Since 1994, it has mobilized, deployed, and employed fighter aircraft worldwide to accomplish air superiority in support of warfighting commanders.

In 2010 the 19th became part of the 15th Wing at Joint Base Pearl Harbor-Hickam. The 19th is an associate unit with the Hawaii Air National Guard’s 199th Fighter Squadron. 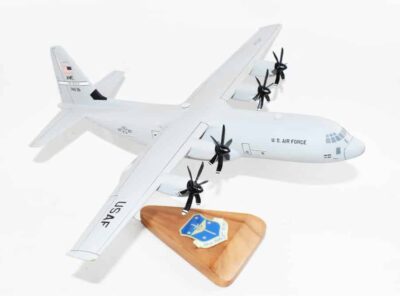