A carefully carved and hand painted plaque of the 143d Airlift Squadron.

History
The origins of the 143d Airlift Squadron begin in 1915 when concerned Rhode Island residents banded together in the true spirit of the citizen-soldier to purchase two Curtis Model “F” Flying Boats, one of which was assigned to the Rhode Island National Guard. The border conflict in Mexico and America’s entry into the First World War prevented much use, and in 1919 the National Guard aircraft, now obsolete, was sold as surplus.

World War II
In 1939 President Roosevelt increased measures to prepare the Armed Forces for the inevitable American involvement in World War II. The State of Rhode Island was allocated one of only two new observation squadrons authorized by Congress that year. On 21 August 1939 the 152d Observation Squadron was organized. Less than one year later, on 25 November 1940 it was federalized for extended active duty. The training paid off. After American entry into World War II, the 152d Observation Squadron immediately took up its primary mission of anti-submarine patrols along the Northeastern shipping lanes. In September 1944 the unit, now designated the 37th Photographic Reconnaissance Squadron, transferred overseas. Assigned to the Fifteenth Air Force, squadron pilots flew Photo Reconnaissance missions in northern Italy, southern Germany and the Balkans until the end of the war in Europe in June 1945.

Air defenseIn 1952 the 152d was transferred to Air Defense Command, given a mission of air defense for Rhode Island, eastern Long Island and over the Atlantic approaches of New York City. In order to accomplish this, the unit was equipped with long-range F-51D Mustangs. In 1956 the United States Air Force, in an effort to upgrade to an all jet fighter force, required Air National Guard Aerospace Defense Command units to upgrade to jet-powered aircraft. The Rhode Island Airport Commission and National Guard authorities found themselves in a conflict over the use of T.F. Green Municipal Airport for tactical jet operations. Unable to resolve these differences the Air Force inactivated the squadron and the National Guard Bureau transferred the 152d Fighter Interceptor Squadron to the Arizona Air National Guard.

Special operations
The 143d Air Resupply Squadron was assigned to the Military Air Transport Service. It was designated at the time as a “Psychological Warfare” unit which supported USAF unconventional warfare (guerrilla warfare), direct action (commando-type raids), strategic reconnaissance (intelligence gathering), and PSYWAR operations. The unit was assigned the Grumman SA-16A Albatross seaplane and for a short time retained the Douglas C-47 Skytrain. There were several minor mission designation changes, and the C-47 was eventually replaced by the Curtis C-46 Commando.

In 1963 the first major mission change for the 143d occurred. Situations around the world produced a need for specialized units which could insert a small group of trained combat troops on land or sea anywhere at a moments notice. The 143d was tasked as one of the representatives of the National Guard in the Air Force’s Air Commando Group structure. The C-46 was replaced with Helio U-10A and U-10D Couriers. During a three-year period starting in 1965, the U-10s belonging to the 143d and other Air National Guard units were transferred back to the Air Force for use in South Vietnam, during which the “Helio” was replaced by DeHavilland U-6 “Beavers”.

In 1968 the U-10s returned from their tour of duty in South Vietnam, and on 1 July, the Rhode Island Air National Guard 143d Special Operations Squadron was authorized to expand to a group level. The 143d Special Operations Group was established by the National Guard Bureau, with the 143d SOS becoming the group’s flying squadron. Other squadrons assigned into the group were the 143d Headquarters, 143d Material Squadron (Maintenance), 143d Combat Support Squadron, and the 143d USAF Dispensary.

The Grumman SA-16 “Albatross” flown by 143d pilots since 1955 was replaced in 1968 with an updated version of the “Albatross”, the HU-16. With twice the cargo capability and range, the HU-16 opened up new avenues of opportunity as was demonstrated in 1970. Flight and Ground crews of the 143d assisted scientists and engineers of the Naval Underwater Systems Center, conducting studies of undersea acoustics, at Lake Tanganyika in Africa during April and again in August at Hudson Bay, Canada.

The unit would work in the Special Operations field for seven more years, during which the HU-16 aircraft were eventually retired in 1972 and replaced with Fairchild C-119G/L “Flying Boxcars”.

As global airlifters, Rhode Island “Herks” were found in all parts of the United States, Europe, Africa, South America and the Caribbean. The 143d played a vital role in deployments such as Volant Oak, Volant Pine, Red Flag, Dragon Hammer, Volant Rodeo competitions and humanitarian efforts such as “Operation Toy Lift” which provided toys to the children of Granada on 1986. In 1989, the 143d was selected for conversion to the C-130E Model.

As part of Air Mobility Command the unit continued to be called upon to support State, Federal, and UN activities throughout the world. Volunteers from the 143d participated in many United Nations relief missions; Somalia in 1992, Operation Provide Promise in 1993 flying daylight air-land missions into Sarajevo along with night airdrops over remote areas of Bosnia-Herzegovina.

Current operations
On 11 September 2001, the 143d responded to the call again, deploying unit members to Ground Zero, to US bases for homeland security and implemented 24-hour operations at Quonset. The 143d AW has supported the Global War on Terror by not only becoming a bridge to and from the theater but by also providing airlift in support of the war effort. The 143d AW provided the 1st ever C-130J Aircraft in a combat role by the U.S. Air Force in December 2004 and continued to support the war effort with both the C-130E and C-130J until retiring the C-130E in 2005. The 143d AW also provided and continues to provide the much needed troop support within Southwest Asia and many other areas of the world.

In December 2001, the 143d received its first C-130J-30. The Wing became the first in the Air Force to receive the “stretch” version of the “J” model. As the most modern tactical airlifter in the world, the C-130J-30 can carry more cargo or personnel farther, faster, and more economically than the C-130E proving its increased airlift capability. The fleet for the 143d was completed with the arrival of the eighth J-model at Quonset on 15 June 2007.

The location of Quonset being the eastern most C-130 base has provided the 143d AW with a unique opportunity to become a “bridge” between Europe and the Continental United States in support of Operation Enduring Freedom/Operation Iraqi Freedom.

Be the first to review “143d Airlift Squadron Plaque,14″, Mahogany” 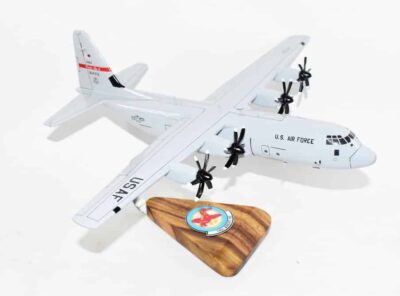 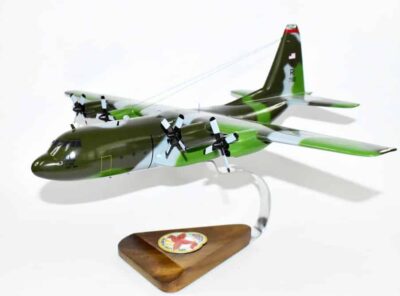