Fly with the 119th Fighter Squadron in this handcrafted F-16 Fighting Falcon Model. Each piece is carved from wood and handpainted to provide a piece you’ll love.

The 199th Fighter Squadron (199 FS) is a unit of the Hawaii Air National Guard 154th Wing located at Joint Base Pearl Harbor-Hickam, Honolulu, Hawaii. The 199th is equipped with the F-22A Raptor.

Overview
The 199th Fighter Squadron is a unit of the 154th Wing. They operate the F-22A Raptor, the Air Force’s 5th generation fighter aircraft with a select component of active duty personnel acting in the cadre role. Its combination of stealth, supercruise, maneuverability and integrated avionics, coupled with improved supportability, represents an exponential leap in warfighting capabilities. The Raptor performs both air-to-air and air-to-ground missions allowing full realization of operational concepts vital to the 21st-century Air Force.

History
World War II
Established in late 1944 at Peterson Field, Colorado, as the 464th Fighter Squadron. Trained under XXII Bomber Command as a Very Long Range P-47N Thunderbolt bomber escort squadron, programmed for B-29 Superfortress escort duty from Okinawa. For four months they received combat training for long-range escort, strafing, and dive-bombing. Training delayed due to P-47N aircraft non-availability, finally equipped in the late spring of 1945 with the long-distance fighters.

Deployed to Okinawa in June 1945 as part of the 507th Fighter Group and prepared for the invasion of Japan along with the 413th and 414th Fighter Groups, all equipped with P-47N. On 1 July 1945 it began flying airstrikes from Ie Shima, targeting enemy ships, railroad bridges, airfields, factories, and barracks in Japan, Korea, and China. On 8 August 1945 the group escorted B-29 bombers on a raid, shooting down several Japanese fighters.

The squadron flew some long distance fighter-bomber sweeps over Japanese Home Islands 1 July 1945 – 14 August 1945 but never performed operational B-29 escort missions due to the end of the war in August. Last “Ace in a Day” of World War II was 1st LT Oscar Perdomo of the 464th.

Remained in Okinawa until inactivated in May 1946. 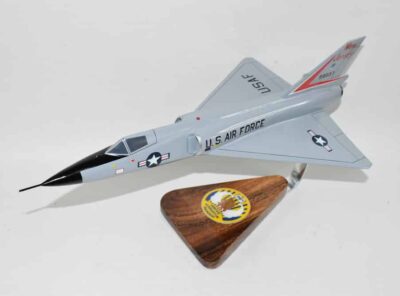