The 10th Flight Test Squadron is part of the 413th Flight Test Group of Air Force Materiel Command based at Tinker Air Force Base, Oklahoma. It performs acceptance testing on refurbished Rockwell B-1 Lancer, Boeing B-52 Stratofortress, Boeing E-3 Sentry, and Boeing KC-135 Stratotanker aircraft before they are returned to their units.

The squadron was first activated as the 10th Pursuit Squadron prior to the entry of the United States into World War II. It served as a test unit as the 10th Fighter Squadron in the southeastern United States until 1943, when it prepared for deployment to the European Theater of Operations. It remained in combat until V-E Day, earning a Distinguished Unit Citation. The unit returned to the United States in 1945 and was inactivated.

In 1950, the squadron was activated in the reserves. After the start of the Korean War, it was called to active duty, but immediately inactivated and its personnel were transferred to other units.

The squadron was activated in 1953 at Clovis Air Force Base, New Mexico as the 10th Fighter-Bomber Squadron, where it assumed the personnel and equipment of an Air National Guard squadron that was returned to active duty. It moved to Europe later that year, and remained there until inactivating in 1991.

In 1994, the squadron was redesignated the 10th Flight Test Squadron and activated at Tinker Air Force Base, Oklahoma.

History
World War II
The squadron was initially activated at Selfridge Field, Michigan in January 1941 as the 10th Pursuit Squadron, one of the three original squadrons of the 50th Pursuit Group.[2][4] It was established under the Northeast Air District as a pursuit squadron, and initially equipped with second-line aircraft. It transferred to Southeast Air District (later Third Air Force) in late 1941 and re-equipped with Curtiss P-40 Warhawks. The squadron trained in the southeast until being transferred to the Army Air Forces School of Applied Tactics in Florida, where it served as a test and demonstration unit.[4]

The 10th, designated as the 10th Fighter Squadron since May 1943, re-equipped with North American P-51 Mustangs and trained as an operational squadron. It deployed to the European Theater of Operations (ETO), where it became part of IX Fighter Command in England in May 1944. It Re-equipped with Republic P-47 Thunderbolts and supported Allied ground forces in France after D-Day, attacking enemy strong points, troop concentrations, armor formations, bridges and other targets. Within a month of the invasion, it moved to Normandy and operated from several forward bases in Northeast France during the summer of 1944 as Allied ground forces moved eastwards towards Germany. The unit supported the Fifth Army movement from southern France though the Lyon Valley, then into Germany as part of the Western Allied invasion in the spring of 1945. The squadron remained in Germany as part of the occupation forces. It returned to the United States and was inactivated in Colorado in November 1945.

Air Force reserves
The squadron was reactivated in the reserve by Continental Air Command in January 1950 as a corollary unit of the 4th Fighter Wing. It was called to active duty in early 1951 for the Korean War and its personnel were used to fill up other units.

The squadron was activated at Clovis Air Force Base, New Mexico on 1 January 1953 and assumed the personnel and North American F-86H Sabres of the 120th Fighter-Bomber Squadron, a Colorado Air National Guard squadron that had been federalized for the Korean War and was being returned to state control.

The unit deployed to West Germany and assigned to Hahn Air Base as a North Atlantic Treaty Organization (NATO) fighter squadron. It moved briefly to France in 1956, but returned to West Germany in 1959 and flew defensive missions in the F-100, F-4 and F-16 as part of the NATO tactical air forces. In late Dec 1990 the squadron deployed to Southwest Asia, assigned to the 363rd Tactical Fighter Wing (Provisional) from January to May 1991, and flew combat missions during Operation Desert Storm. After returning to Hahn, squadron pilots spent the last summer in Germany flying unit aircraft back across the North Atlantic Ocean to gaining Air National Guard units in preparation for the wing / squadron inactivation in Sep 1991.

Flight test
The squadron was reactivated at Tinker Air Force Base, Oklahoma in March 1994 as a testing and checkout squadron for supported aircraft after depot-level maintenance prior to the aircraft being returned to active service.[1] The squadron absorbed the personnel, mission and resources of the 10th Test Squadron, which was simultaneously inactivated. 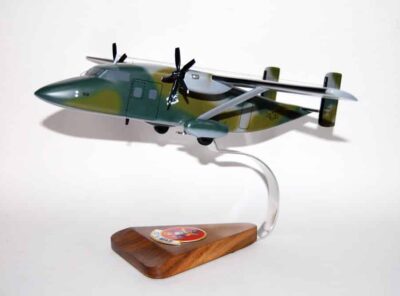 10th MAS C-23 Sherpa Model Fly the European shuttle again with the 10th MAS in the hand crafted model. Each piece is carved from wood and hand painted to provide a piece you’ll love. World War II Paratroopers about to … Read More