In April 1971, VA-303 was the first reserve squadron to transition to the A-7A Corsair II. In November 1975, it deployed aboard USS Ranger for the annual active duty training and as part of CVWR-30’s tactical air mobilization test, and for the operational readiness exercise/inspection to ensure the squadron was seaworthy and combat ready.

On 19 October 1985, VFA-303 was the first reserve squadron to transition to the F/A-18 Hornet. On 25 September 20 Nov 1990, a detachment of the squadron’s F/A-18 Hornets and personnel, along with VFA-305, joined CVW-11 aboard USS Abraham Lincoln for her transit from Norfolk to Alameda, via Cape Horn. 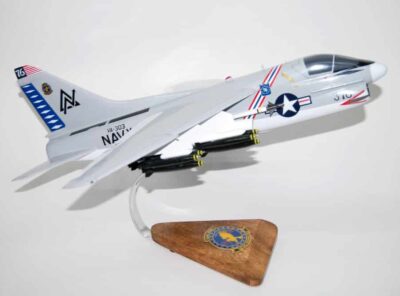 VA-303 Golden Hawks A-7a USS Ranger Fly with the Golden Hawks of VA-303 in this hand crafted A-7a with 1976 markings. Each model is carefully carved from wood and hand painted to provide a piece you’ll love. Specifications: Length:  18 … Read More