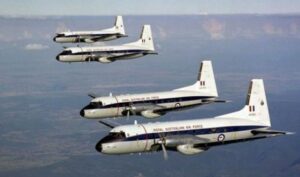 The Hawker Siddeley HS 748 is a medium-sized turboprop airliner that was originally designed and produced by Avro, a British aircraft manufacturer. It was Avro’s last aircraft before it was absorbed by Hawker Siddeley. The HS 748 was developed in the late 1950s as a way for the company to shift its focus towards the civil and export markets. It was powered by the popular Rolls-Royce Dart turboprop engine and was designed to be a modern feederliner that could replace the aging Douglas DC-3s that were in widespread use at the time. The HS 748 was intended to have a seating capacity of around 40 passengers and was designed to have high performance, including short takeoff and landing (STOL) capabilities and overall ruggedness. It made its first flight on June 24, 1960 and entered revenue service the following year.

Once it was in service, the HS 748 found a niche in the short-haul market. Several different models of the regional airliner were developed, including versions with more powerful Dart engines and a higher gross weight. The most distinctive variant was the HS 780 Andover, a military transport model developed for the Royal Air Force (RAF) that had a large rear loading ramp and squatting main landing gear to help with loading bulky freight items. By 1988, when production of the HS 748 was terminated, a total of 380 aircraft had been produced by Hawker Siddeley and the Indian aviation company Hindustan Aeronautics Limited (HAL). In the 1990s, a larger, stretched version of the HS 748 called the BAe ATP was developed and attempted to compete with market leaders such as the de Havilland Canada Dash 8 and ATR 42, but it saw only limited sales before production was terminated. 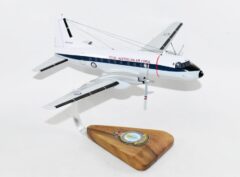