The Antonov An-225 Mriya is a strategic airlift cargo aircraft developed and produced by the Antonov Design Bureau in the Soviet Union. It was initially created in the 1980s as a larger version of the Antonov An-124 airlifter for the express purpose of transporting Buran-class orbiters for the Soviet space program. The An-225 made its maiden flight on 21 December 1988, but only one example was ever completed, although a second airframe with a slightly different configuration was partially built. After a brief period of use, the aircraft was put into storage during the early 1990s. In the late 1990s, it was refurbished and reintroduced for commercial use by Antonov Airlines, carrying oversized payloads. There were multiple announcements regarding the potential completion of the second airframe, but it has largely remained on hold due to a lack of funding, with reports of it being 60-70% complete by 2009.

With a maximum takeoff weight of 640 tonnes (705 short tons), the An-225 holds several records, including being the heaviest aircraft ever built and having the largest wingspan of any aircraft in operational service. It was frequently used to transport objects that were previously thought to be too large to be moved by air, such as 130-ton generators, wind turbine blades, and diesel locomotives. Both Chinese and Russian officials also announced plans to adapt the An-225 for use in their respective space programs. The Mriya gained significant public interest due to its size and uniqueness, attracting a global following. The only completed An-225 was destroyed in the Battle of Antonov Airport during the 2022 Russian invasion of Ukraine. In response, Ukrainian President Volodymyr Zelenskyy announced plans to complete the second An-225 to replace the destroyed aircraft. 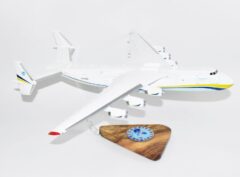